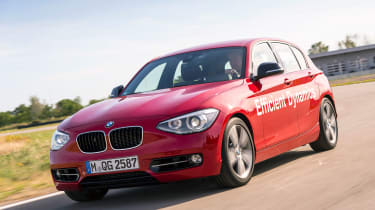 You don’t really know it’s there but the Direct Water Injection technology in BMW’s 1 Series DWI prototype appears to have real potential for boosting the efficiency and performance of the brand’s internal combustion engines.

Forget everything you thought you knew about water getting into an internal combustion engine’s cylinders, because BMW says that a well-timed spray of fluid can improve a petrol engine’s efficiency by three to eight per cent and its power by five to ten per cent, while also preventing the risk of 'knocking'.

And it has built a car to prove the theory behind Direct Water Injection (DWI) is sound. This BMW 1 Series is powered by a three-cylinder, 1.5-litre turbocharged engine, here developing 215bhp instead of 201bhp thanks to DWI. The compression ratio is upped from 9.5 to 11.0:1.

DWI works thus: a seven-litre water reservoir is mounted in the engine bay, with its levels fed by otherwise wasted condensation from the air conditioning unit. Once the engine is up to temperature and a certain point in the rev range is exceeded, the water can be diverted one of two ways – either a fine spray is fired into the inlet manifold (referred to as indirect - this is the system seen on the M4 Safety Car), or it is fed into a high-pressure pump and mixed with fuel to form an emulsion. 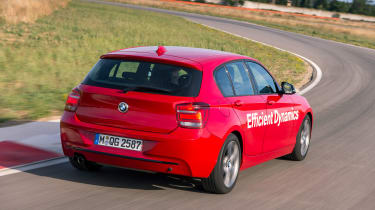 From there, the emulsion is directly injected into the cylinder during compression. The spray is so fine that it evaporates before the crucial combustion phase begins.

The idea behind this is that the spray of water works as a secondary cooler of intake air before the combustion phase, BMW claiming at least a 70oC reduction to around 330oC with DWI from typical figures of 400- to 500oC without. BMW likens it to driving the car on a cold winter’s day all the time.

This DWI technology is specifically for forced induction petrol motors only, having a particular benefit in cars that undergo high-load situations regularly and which can be susceptible to knocking. BMW also says that 80 per cent of global customers would never have to refill the DWI reservoir, as the air conditioning provides enough fluid for all but the toughest of uses. 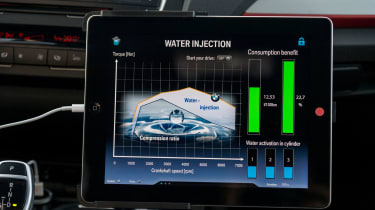 In practice, it is impossible to tell DWI is working. We did 0-80mph, 50-120mph and 50-80mph full-bore acceleration tests on BMW’s baking hot Miramas test venue and the only thing that indicated DWI was in action was the laptop plugged in next to us. It showed that we had used 19 per cent less fuel under these conditions than if DWI hadn’t been active, as bigger gains are to be had from the system when engaging in hard acceleration. The 1 Series used just 0.04 litres of water during a 2.5-mile series of tests.

While the indirect water injection of the BMW M4 Safety Car is likely to be seen in production next year, this more sophisticated DWI system has yet to receive approval from the BMW board, so an on-sale date is yet to be confirmed.