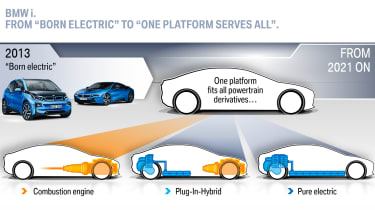 BMW is to push ahead with a common platform that will allow it to produce not only additions to its i range of bespoke electric vehicles, but also plug-in hybrid and pure-electric versions of its most popular models, including the 3 Series.

The plan is part of the German manufacturer’s strategy ‘Number One > Next’, which aims to build on the original policies that gave birth to the i and iPerformance ranges. The fresh commitment is expected to deliver 25 electrified BMWs by 2025, 12 of them pure-electric - and within the same timeframe, BMW expects anywhere between 15 and 25 percent of its sales to be electrified.

At the heart of the plan is a heavily modified version of the BMW CLAR platform. It will make its debut in 2021 under the iNEXT, the flagship i car that’s also expected to introduce BMW’s most complete suite of autonomous technologies. The new architecture will sit alongside a modified version of BMW’s UKL1 front-drive platform (as used on the current MINI), called FAAR. 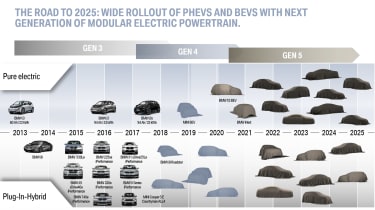 Unlike the chassis that underpin the i3 and i8, the revamped CLAR and FAAR are fully scalable and usable for either combustion engines, plug-in hybrid powertrains or pure-electric vehicles. They will have two basic formats, with battery height the main differentiating factor: a lower configuration for saloons and coupes, and a higher layout that is designed for SUVs. BMW admits that all vehicles to use the new platform, including conventionally powered models, will sit slightly taller than current cars - but insists that most of this will be negated through the use of larger wheels.

BMW calls its latest electric vehicles - such as the recently launched i8 Roadster and the revamped i3 94Ah - ‘Gen 4’. This classification, which will also apply to the pure-electric MINI, will have a relatively narrow time frame before ‘Gen 5’ arrives in 2020 and 2021, via the pure-electric X3 and iNext.

The ‘Gen 5’ models will also introduce a new, more compact electric motor, which now incorporates a single-speed gearbox for improved packaging and efficiency. It will be offered in a series of outputs - 100kW (134bhp) and 190kW (255bhp) for basic models, and 250kW (335bhp) and ‘more than 300kW [443bhp]’ for higher-performance editions.

Front-drive FAAR models are expected to have up to 200kW (268bhp) in a front-mounted motor, while rear-drive CLAR vehicles should start with more than 220kW (295bhp). BMW also says the layout could feature a motor on each axle, for four-wheel drive, and in ‘hot’ versions, a triple-motor set-up with two at the rear, for a combined output north of 600kW (800bhp) and a potential 0-62mph time of around three seconds.

The platform is flexible enough that it can accommodate a range of battery packs, too; compact executive models (such as the 3 Series) will get 60kWh and 90kWh batteries, for ranges of 450km (280 miles) and 550km (324 miles) respectively, while luxury models (the likes of the 5 Series) will use the larger of those two options or an even bigger 120kWh unit for a range of 700km (435 miles). 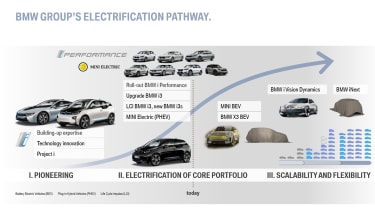 BMW is also working on improving the performance of the electric motor in its plug-in hybrids. It’s expected to increase to up to 150kW (201bhp) and 450Nm of torque, delivering low-down performance more akin to that of a fully electric vehicle. The new combined motor and transmission will bring space savings too, allowing PHEVs to offer the same luggage space as their conventionally powered counterparts.

The new policy casts doubt on the future of the construction techniques used in the i3 and i8. These two cars made extensive use of a bespoke platform and carbonfibre, but using the materials in mass-manufacturing is said to present several issues on costs and logistics.

Ian Robertson, BMW’s board member for sales and marketing, told Auto Express, “There will be more i Products, in the same way that there are pure M products. And we’ll see the i brand developing further, through i Performance as well. But what we can’t do is limit our capability to respond to changes in the market.” He stopped short of saying that future i products would use the same construction techniques and materials as the i3 and i8.

What do you think of BMW’s electric action plan? Have your say in the comments…