The BMW 225xe is the fastest and best handling MPV on the market, and it could be the most economical too… 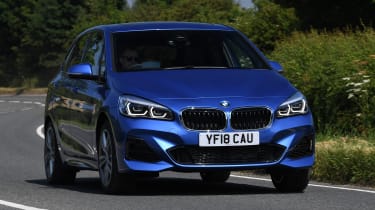 If you really must have a plug-in MPV, the BMW 225xe is the fastest, the best handling, and – potentially – the most frugal, too. It’s also the only plug-in MPV on the market, which brings obvious running cost benefits. However, that’s all offset by our car's eye-watering price. The standard petrol and diesel models will make more sense for most buyers, and if a hybrid is top of your wish list, then BMW's i3 is more interesting and even cheaper to run.

Once upon a time, the mini-MPV category was one of the busiest segments in the new car market, but the rise of the SUV has seen its popularity dwindle. You’ll find 4x4-inspired family cars jostling at the top spot of the sales charts, while more traditional one-box people movers are almost nowhere to be seen.

It may seem odd then, that BMW, a maker which currently offers six different SUVs, also produces a two traditional MPVs: the five seat Active Tourer driven here, and the larger seven-seat Gran Tourer. But this is clearly for families with the sort of disposable income of SUV buyers, because this top-spec 225xe M Sport (with options) costs a barmy £42,525. So, to be blunt, why bother?

Well, there are a few things that help this Active Tourer to stand out: namely its drivetrain. There is, of course, a wide range of petrol and diesel options, but this this top end model is a plug-in hybrid. Here, it pairs the familiar 1.5-litre three-cylinder turbocharged petrol engine found in a Mini Cooper with a small electric motor. 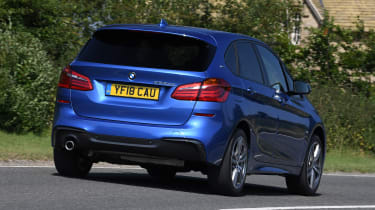 In official tests, it means that the 225xe will hit 113mpg and emit just 57g/km of CO2. The latter number grants it exemption from the London Congestion Charge, and brings with it competitive company car tax breaks, too. You’re unlikely to ever hit that claimed fuel economy figure, however, unless you exclusively cover very short journeys and keep the car topped up with electricity – either at home or at your destination.

The system itself works very smoothly. It’s very relaxing to drive, and can perform silently in EV mode for up to 28 miles. By plug-in hybrid standards, performance in electric mode is excellent, too. There's easily enough shove to keep pace in regular traffic, and if you need a more power, the petrol engine kicks in. By any margin, this is a quick car: the 0-62mph sprint takes less than seven seconds – making this the quickest new MPV on the market. If that sort of things matters to you.

It’s also the finest handling MPV in its class. It shares its platform with the BMW X1 and the MINI Countryman (both of which corner impressively themselves) and it means that the Active Tourer is one of a very select group of people movers that could be considered fun to drive. The steering is sharp – almost too sharp at first – but there’s a consistency and pleasing weight to it, which gives plenty of confidence. 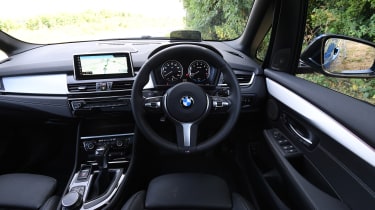 Inside, the 2 Series Active Tourer is the best built and most stylish MPV on sale, too. The dashboard looks smart, and the fit and finish is very impressive. It’s not quite as packed full of the sensible touches you’d expect from a people carrier, though.

And that just touches on this car’s biggest problem. The whole point of a car like this is that it needs to be spacious and practical and, well, this isn’t either, really. The back seats offer decent headroom, but legroom doesn’t seem any better than what you get from a 3 Series Touring. The boot, at 465 litres, is smaller than its traditional estate cousin, too. Of course the 2 Series’s taller body makes it easier to both fit a child seat and the kids into them, but if that’s a major concern, then why not choose the X1?