Fun to drive and with a strong engine range 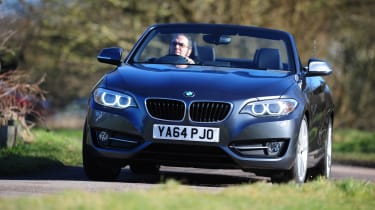 BMWs have always been decent drivers’ cars, with good weight distribution thanks to their front-engine, rear-wheel-drive layout. The lovely balance this set-up brings is still ingrained in the 2 Series Convertible, but it’s not quite as composed as its coupé cousin.

Removing the roof for a cabriolet reduces the car’s structural rigidity, and even though the 2 Series is 20 per cent stiffer than the model it replaces, driving along smooth roads its chassis wobbles and fidgets around, with noticeable vibrations fed back through the steering column.

Big bumps knock the chassis off-line, too, and you have to guide the wheel with a firm hand to keep the 2 Series on course on anything other than a perfect surface. 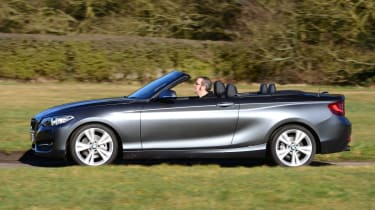 This is even with the optional adjustable suspension dampers linked to BMW’s Drive Performance Control system set to Comfort, although the ride has a nice soft edge and feels controlled. But again, only on super-smooth roads.

However, despite this dynamic downside there is still lots of grip on offer. The BMW’s steering is light – even in the Sport setting – but it’s not devoid of feel, so you can gauge what the front and rear wheels are doing.

The 2 Series Convertible serves up nicely balanced handling, allowing you to adjust the car’s cornering line with the accelerator and steering. However, the 1 Series underpinnings are obvious, and the soft-top 2 Series feels more like a modified hatchback to drive than an out-and-out sports car.

There's a wide range of engines on offer, meaning there should be something to suit all preferences. The petrol line-up now starts with the three-cylinder 218i, moving up through the four-cylinder 220i and 230i, through to the top-spec M240i, which uses a six-cylinder unit with 335bhp. It's a superb engine, with a great soundtrack and smooth power delivery.

If you're after a diesel (and a lot of buyers still are) there's an entry-level 218d with 148bhp, which offers decent performance and good fuel economy. The 220d diesel represents the best compromise, however, as with 187bhp and 400Nm of torque it has plenty of performance and is very nearly as efficient.