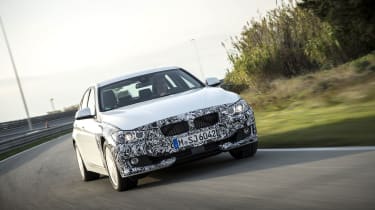 BMW's current 3 Series ActiveHybrid is a powerful alternative to the faster diesel models, but the German company's next generation plug-in hybrid comes with tax-busting low emissions. Will it be enough to convert company car buyers to petrol? The pre-production model certainly drives well enough, but its fate will depend on UK pricing.

BMW is developing a plug-in petrol-electric hybrid version of its best-selling 3 Series saloon, and it could go on sale within two years with CO2 emissions as low as 50g/km and an official fuel economy rating of 140mpg.

Underneath the light disguise of the prototype we drove is a 3 Series that is differentiated only by the battery charging inlet cover located in the wing just behind the front left wheel. A lithium-ion battery, mounted underneath the slightly smaller boot space, can be charged in as little as two hours from a dedicated home charging point - or around twice that from a standard public charging station.

It powers an electric motor - derived from the eDrive technology seen in BMW's i models - up to speeds of 75mph in all-electric mode and has an electric-only range of 22 miles with zero emissions. 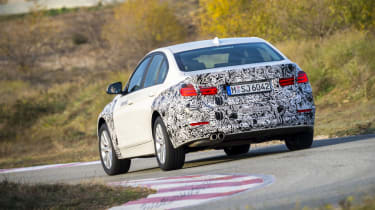 BMW settled on this range based on customer driving data and a compromise on weight affecting the car’s balance, as a longer range would have meant a heavier battery. The weight of the plug-in hybrid system adds about 160 kilograms as it is. Despite this, engineers suggest that the balance of the car could be very close to BMW’s usual 50:50 weight distribution.

Under the bonnet is the familiar 2.0-litre TwinPower turbocharged four-cylinder petrol engine producing 177bhp and 320Nm, though this only comes to life when the battery is depleted or more power than the electric motor’s 93bhp is required. This is matched up to an eight-speed automatic transmission, which itself has been optimised to enhance overall efficiency by a further two per cent.

The driver can choose the 'eDrive' setting, which switches the 3 Series to solely-electric mode, or select a ‘Save’ function to maintain the battery’s charge at a minimum of 50 per cent. If it is below this at the time of selection the petrol engine will operate in order to bring the lithium-ion battery up to charge. 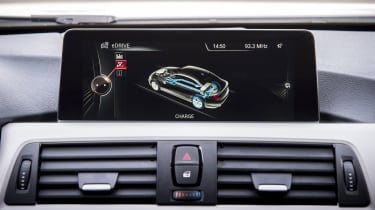 As with conventional BMWs there is a choice of drive modes available: Comfort, Sport and Eco Pro. Each uses the hybrid system in a different way and to varying extents. Sport mode employs both motors at all times and also recharges the battery through regenerative braking at a faster rate.

Our first drive in the prototype highlighted that the project remains a work in progress, mainly in the area of power delivery, which lacks finesse. When the power does come in there is no shortage of it - especially in Sport mode. When the engine and motor give their maximum there's 241bhp and 400Nm on tap.

Where the BMW does impress, even at this early stage, is in its composure when cornering at higher speeds. The additional weight is distributed low down in the car, so it handles much like any other 3 Series, with great balance.

While diesel cars are likely to remain more popular in the UK for now, the plug-in hybrid makes a compelling case for business users that prefer petrol power thanks to its low emissions. What price this efficiency will come at remains to be seen.