The BMW 4 Series Convertible has been updated for 2017. We test it in 430i M Sport guise to see if it's improved 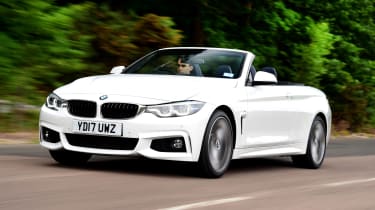 The BMW 430i Convertible sits in a middle ground where neither its performance nor its ability seems worthy of the price tag. Although down on power, the cheaper 420i is almost as capable – offering much better value for money overall. Having said that, if your budget can stretch to the flagship 440i model, you’ll be able to see, feel and hear exactly where your extra cash has gone.

The BMW 4 Series range – made up of the Coupe, Gran Coupe and Convertible – has been around since 2013, with over 400,000 examples sold globally during that time. The convertible has always lagged behind its stablemates in the sales charts, but has a recent round of updates made it a more appealing proposition? We’ve driven it in the UK for the first time to find out.

BMW clearly didn’t believe there was anything wrong with how the 4 Series looked, because on the face of it very little has changed. Its recognisable front end now features slightly larger air intakes, a subtle new bumper and twin LED headlamps. In fact, it remains a sharp-looking car, but still lacks the sleek silhouette of the Mercedes C-Class Cabriolet.

Tweaks have also been made to the model lineup. The core 420i and 420d models remain, while new 430i and 440i petrol editions added to the range. It’s the former we’re driving here, in standard M Sport trim. 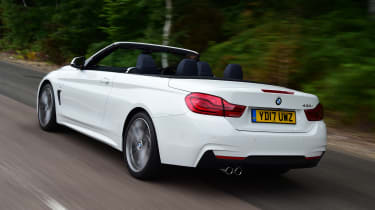 Previously, the 430i badge would have meant a tuneful 3.0-litre staright-six under the bonnet, but fold back the roof, hit the throttle and what you hear isn’t the sonorous motor of old. Instead, it’s a tuned version of the smaller 2.0-litre four-cylinder engine from the cheaper 420i.

In the 430i, it develops 249bhp and 350Nm of torque – that’s a healthy 67bhp and 70Nm advantage over the 420i. As you’d expect it sits squarely between the entry-level convertible and top-spec 440i in terms of performance, with BMW claiming a 0-62mph time of 6.3 seconds. And it plugs the gap on price, too, priced at £43,180 when fitted with BMW’s slick eight-speed automatic gearbox. A manual model is available, and slashes £1,390 from the list price.

The engine in our car is a strong performer with plenty of low down grunt, making it feel every bit as quick as BMW claims. As well as cranking up the performance from the 2.0-litre turbo, engineers have installed some exhaust trickery to try and make the Convertible sound like it has the engine its badge deserves. There are a few burbles when you lift of the throttle, and a mild rasp at the top end, but there’s no hiding the thrashy four-cylinder engine note buried beneath it all.

Other than the shaving two seconds from its 0-62mph time, it’s difficult to see where the near-£3,000 premium has gone. The 430i is the sharpest car in its class thanks to precise steering and a beautifully balanced chassis, but it’s no more accomplished than the basic model. It ushers you down the road marginally quicker and makes a slightly fruitier, if somewhat contrived noise, but that’s about it. 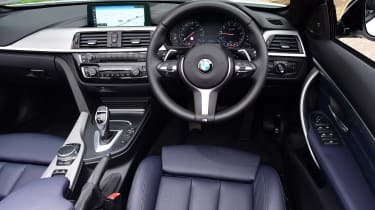 When it comes to the best all-rounders, there are more talented options out there, too. The Audi A5 and Mercedes C-Class cabriolets are both quieter cruisers and feel more upmarket thanks to their plusher cabins and premium trim. In this respect, the 4 Series range is beginning to feel a little dated despite the recent update.

Other sacrifices are to be made if you go for the 4 Series Convertible – especially when it comes to practicality. The boot is a reasonable 370 litres with the roof in place, but problems arise when you want to drop it. Doing so sees luggage capacity shrink to just 220 litres. Compare that to the 380 litres the Audi offers even when the roof has been lowered, and it’s another minus point for the compromised BMW.