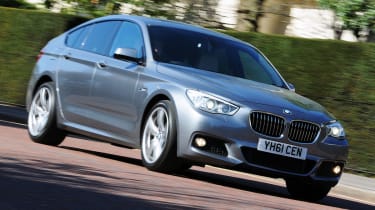 The BMW 5 Series Gran Turismo is basically a hatchback 5 Series with a slightly raised seating position. It's meant to offer a bit more utility and comfort than the saloon with more room for rear passengers. Positioned as a high-spec flagship alternative to the usual luxury SUVs, it's only available with high-powered 3.0-litre petrol and diesel six-cylinder engines, as well as a 4.4-litre V8 twin-turbo petrol. It's comparatively expensive, though. However in a bid to chase the lucrative fleet market BMW has now introduced a 520d GT with the efficient four cylinder diesel engine from the standard range. Just like the standard 5 Series the Gran Turismo was given a facelift for 2013 with a subtle range of updates including a redesigned tailgate that has been extended to increase the boot volume.

You won't be disappointed by the performance, that's for sure. Even the entry-level 520d has 183bhp and does 0-62mph in 8.9 seconds, while the top-spec 550i has a 442bhp 4.4-litre V8 and does 0-62mph in 5.0 seconds, so it really depends on how much you want to spend. All models get a brilliant eight-speed auto gearbox too. The GT feels a bit more ponderous around corners than the basic 5 Series, thanks mainly to its raised ride and significant extra weight which shifts around in tighter turns. It's not quite as comfortable either, feeling a bit more fidgety over small bumps. M Sport models get larger alloys and look the part, but they are even more uncomfortable. That said, all of the engines are so smooth and wind noise is so well insulated that the 5 GT is still an excellent way of covering long distances with little discomfort. However with the 5 Series Touring being cheaper and equally capable of taking long journeys in its stride the GT does still seem slightly redundant.

It all depends how deep your pockets are but in the main the Gran Turismo will be expensive to run. We'd go for the new 520d GT which does 53.3mpg and emits 139g/km, making it reasonably efficient, especially given the performance on offer. Buy the 550i and you'll be on first name terms with your local petrol retailer, as it does little more than 30mpg, while 214g/km means a fairly hefty tax bill. Servicing and maintenance are likely to be on a par with the 5 Series, but the GT isn't as in-demand second hand, so residual values aren't as good. Still the high level of standard equipment and reasonably low emissions output make the entry-level diesel model a tempting choice for company buyers seeking a luxurious fleet car that won't break the bank.

The BMW 5 Series Gran Turismo doesn't have the elegance of other saloon alternatives, such as the Mercedes CLS or the Audi A7 Sportback. That hatchback tail is a bit ungainly, as is the slightly raised ride height. Still, the front end is aggressive and purposeful. The lastest model has been tweaked to look more like the 3 Series with new front and rear lights and a sharper front bumper. At the back the awkward 'hump' from the hatchback has been smoothed over but it still looks wide and odd at best. Inside, it's a real quality fest, with lovely leather, metal and soft-touch plastics splashed across the wide and welcoming dash. The slightly raised seating position means visibility at the front is good, although those rear pillars get in the way when reversing. All models are very well equipped, though we'd stick with the base SE and add options such as sat-nav and a head-up display rather than forking out for the pricy M Sport versions - which command a hefty premium over the standard car for relatively little extra kit - although now buyers also have the choice of 'Modern' and 'Luxury' trims too.

BMW won't like it being described as this, but the GT's tailgate opens in the same way as a Skoda Superb's: you can press a button for the whole thing to open up, or just the saloon part. With the rear seats up the boot now measures 500 litres, which is 20 litres less than a 5 Series saloon. But fold the rear seats down and that expands to 1,700-litres, which is 30 litres up on the 5 Series Touring estate. However, the load space isn't totally flat. Handily, though, there is a divider between the load area and rear seats to prevent smells entering the cabin. Rear seat space is excellent, as you can order individual chairs that recline and slide. There is as much legroom as in a 7 Series saloon and lots of headroom too. Don't choose the bench seat though, as the middle seat is pretty much useless because of the large transmission tunnel so family buyers are better off with the Touring estate model.

With twin front, side and curtain airbags, as well as highly sophisticated traction and stability control systems that have several stages depending on which driving mode you place the car in, not to mention a structure that's as stiff and crash-proof as the standard 5 Series, the GT is very safe indeed. Options include adaptive cruise control and a head-up display that means you never have to take your eyes off the road. As for reliability, it uses similar running gear as the 5 Series and 7 Series, and all the engine have a proven track record so it should be very reliable indeed.