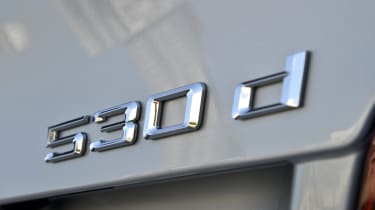 There was little wrong with the 5 Series before, but these small changes help to move it further head of the pack. The 3.0-litre diesel is one of the best on sale and is now more efficient than ever. It may not be as desirable as Maserati’s new Ghibli, but the BMW is far more accomplished. Cabin tweaks and more generous equipment keep it firmly at the top of the executive class.

In the premium executive class, things move quickly. With the all-new Maserati Ghibli on the road and a thoroughly revamped Mercedes E-Class on sale, the BMW 5 Series needed a refresh in order to stay ahead of the pack. The changes made by BMW are minor – but they do the job.

At the front, the newly shaped bumper and tweaked headlamps echo the look of the 3 Series, while at the back redesigned lights and a curved lip on the bumper are the only differences. Two new trim levels have been introduced: Modern and Luxury. We’re testing the latter, which comes with new 18-inch wheels, plus chrome trim on the door handles and window surrounds. Subtle aerodynamic updates and a new coasting feature for automatic models mean the 3.0-litre diesel in the 530d saloon we drove emits just 134g/km of CO2 and returns 55.4mpg – as long as you go for the no-extra-cost 17-inch alloys.

It’s a remarkable engine, with rapid in-gear performance and excellent refinement. Pushing the throttle even lightly summons 560Nm of torque from just 1,500rpm, with a muted growl from the exhausts and an effortless surge of acceleration.

The suspension has been honed to improve ride comfort, including new settings for the dampers. Our test car also came with the optional Variable Damper Control system, which not only allows the 5 Series to better soak up rough roads, but also tackle corners with less body roll.

It’s still one of the most engaging cars in its class to drive, with only the new Ghibli running it close. Two new engines have been introduced at either end of the range: a fleet-friendly 518d with 141bhp, and at the other end of the spectrum a detuned version of the 4.4-litre twin-turbo V8 from the M5 – badged the 550i.

Every 5 Series in the range now gets goodies like sat-nav, xenon headlights, Bluetooth and a USB connection as standard. Inside, new options such as digital dials and a trackpad for the iDrive infotainment system are imported from the 7 Series. From November this year, fully automated parking and a Traffic Jam Assistant that drives the car for you at speeds of up to 25mph will be available.