Can a facelift help boost the appeal of the 5 Series GT? 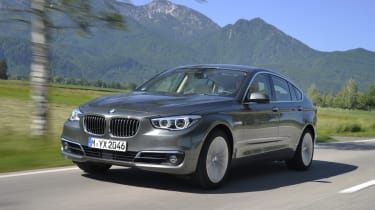 The previous Gran Turismo was hard to recommend, and even with this facelift it’s still not our first choice in the 5 Series range. It’s versatile, but so is the Touring, and not only is that car more fun, it costs a lot less. This petrol turbo may be the fastest car on offer, yet it doesn’t make sense in the UK. If you want a 5 GT, go for one of the diesels.

Every BMW 5 Series has been facelifted, including the much-maligned Gran Turismo. Introduced to the range back in 2009, it only makes up a small fraction of total sales in the UK, so to help increase its appeal, the GT has received by far the most extensive changes.

At the front, the styling tweaks are the same as on the saloon, but at the back the dumpy tailgate has been smoothed over and extended to improve the boot space. The design still looks awkward, though, and there’s no rear wiper.

The extra length adds 60 litres of luggage space, bringing the total to 500 litres with the seats up. You can also slide the rear seats forward to free up 650 litres, and with the split seatbacks folded flat the GT can now carry a maximum of 1,700 litres, which makes it slightly larger than the 5 Series Touring.

Rear legroom is on a par with the BMW 7 Series, and there’s a huge amount of headroom, too, helping to justify the £2,500 price premium over the Touring. The only engine available for us to test was the 3.0-litre straight-six twin-turbo petrol, which is not only pricey, but has relatively poor fuel economy of 34.4mpg.

The diesels are much better, particularly the 530d, which is both punchier and has much improved efficiency. The slightly raised ride height and extra 230kg in weight over the saloon mean the GT feels nowhere near as sharp when cornering. So unless you genuinely need the extra space, the 5 Series Touring is not only better looking and more fun to drive, it’ll also cost you £2,000 less to buy.