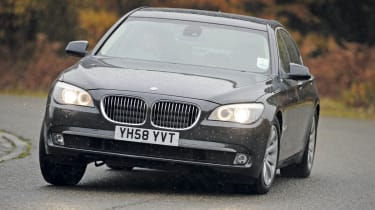 The new looks will appeal to more buyers, and if you’re privileged enough to be in the market for a 7-Series, not many models can match it. Not only is it comfortable and about as technically advanced as cars get, it’s fast and frugal. Endless power and a nimble rear-drive platform provide a hint of old-school saloon, too. It’s difficult to recommend a £54,000 vehicle at present, but the economy and CO2 figures mean buyers will save hundreds by choosing the 730d over its rivals.

BMW’s 7-Series is back, and it’s aiming to set a new benchmark for luxury models. With a fresh look and toned down rear end, the car takes a more subtle approach.

However, don’t be fooled by the modest lines of the exterior, because this latest executive quickly proves it has what it takes to be leagues ahead of most rivals.

Never mind luxury – fuel economy and emissions are at the top of the class, too. Average consumption of 39.2mpg is good, particularly when you consider that the BMW weighs 1,865kg. You’re likely to see even better figures when the limo is in its natural motorway habitat, because it cruises at a hushed 1,700rpm at 70mph.

This efficiency is unlikely to deteriorate when you floor the throttle, either. The diesel-powered 730d delivers 242bhp, and is still faster than rivals such as the Audi A8 3.0 TDI and Mercedes S320 CDI.

There seems to be a limitless wave of torque – a maximum of 540Nm is available from between 1,750rpm and 3,000rpm. That means you’re never short of overtaking power.

While the 7-Series is large, it proves to be nimble and agile to drive. You are aware of its size when negotiating narrow roads, but hit a clear stretch of tarmac and it corners precisely and feels light on its feet.

Push too hard in the bends, and there’s plenty of action from the variety of electronic driver aids. Yet the car is easy to control at the limit.

However, that’s not what the 7-Series is all about. Inside, the build quality and materials are unparalleled. Thick, plush leather is used throughout the cabin, and there’s plenty of dark walnut and aluminium trim around the centre console.

One issue we had with the model we tried was its cream upholstery – a dark finish suits the cabin better. Still, a 500-litre boot and plenty of space in the rear mean that the 730d is as practical as it is sumptuous.

Rival: Mercedes S-Class There’s no stiffer competition in the executive sector than the S-Class – it’s easily one of the best production cars money can buy at the moment. But we think it could be left trailing by the new BMW.