German giant has built its first petrol-electric car – but it's not exactly green! 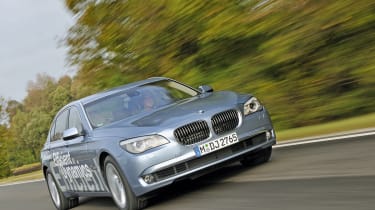 To produce a two-tonne performance saloon with nearly 500bhp and economy of 30mpg-plus is a stunning engineering feat. But has BMW missed the point? When you compare it to adequately powered diesel rivals, the Active Hybrid 7 isn’t very convincing. What’s more, it’s hugely expensive, at nearly £100,000, and the drivetrain compromises the 7-Series’ boot space. Perhaps that’s why the firm isn’t bringing it here.

Half-eco warrior, half-supercar! BMW has launched its first hybrid – a petrol-electric version of its flagship 7-Series saloon. But if you’re expecting a fuel-sipping rival to the Toyota Prius and Honda Insight, think again.

Taking its lead from the likes of the Lexus LS 600h and Mercedes S400, the Active Hybrid 7 uses the latest technology to maximise performance and efficiency.

With a total power output of 459bhp, 30.1mpg economy and a £95,000 price tag, it won’t be top of any environmentalist’s wish list. But under the skin, it’s undeniably impressive.

At the heart of this car sits the 4.4-litre twin-turbo V8 from the 750i. However, by increasing boost pressure, the firm has increased power from 407bhp to 444bhp. A compact electric motor is packaged neatly within the brand new eight-speed auto gearbox – this assists the petrol engine under low to medium acceleration. Unlike a Prius, though, there’s no option to run on electric alone.

Combine the two power sources, and the car delivers a headline figure of 459bhp, but that tells only half the story. Thanks to the electric motor’s superior torque characteristics at low revs, peak pulling power of 700Nm arrives at 2,000rpm – which translates to incredible pace.

Acceleration off the line is stunning, with 0-62mph dispatched in 4.7 seconds – that’s only one-tenth slower than the similarly priced 544bhp 6.0-litre V12-engined 760i. And the Active Hybrid 7 goes 39 miles further on every gallon of unleaded.

Incidentally, the petrol-electric model is also 21 per cent more efficient than the 401bhp 750i, and shaves six-tenths-of-a-second off its 0-62mph sprint time.

Thanks to all that torque, there’s devastating acceleration at any engine speed. The newly developed eight-speed box is a gem, too, providing deft and well judged changes, while those extra two ratios keep the engine in its sweet spot more of the time.

The fully electric power-steering is pleasingly weighted, but compared to that of the standard car it feels numb and disconnected. In every other way, though, this hybrid is just as dynamically talented as the 750i – despite the fact that it weighs 100kg more – turning in sharply and gripping strongly through corners.

A lot of credit must go to BMW’s Dynamic Drive Control system. This juggles the suspension settings and gives the option of Comfort, Normal, Sport and Sport+ modes to keep the 2.1-tonne 7-Series firmly in check.

Come to a halt and the engine shuts itself down. It’s a sensation we’ve become accustomed to in superminis with stop-start systems, but in a luxury car this size it feels unusual. Take your foot off the brake and the V8 fires smoothly – using the electric powerpack instead of a conventional starter motor to get it spinning.

For drivers who like to know what’s going on under the bonnet, energy flow is shown on the instrument display, below the tachometer. You can see the amount of energy regeneration under braking, or the level of boost being provided by the electric motor during acceleration.

For even more detail, the central display can provide visual information on the interaction between the engine and hybrid system, as well as bar graphs that analyse the efficiency of your driving.

One thing holds the BMW back, though. The lithium-ion battery cells are packaged in the boot, which eats into load space – crucial in a car in this market sector. So, while the 7-Series will attract plenty of attention in the golf club car park, you’ll probably have to throw your bag on the back seat! Plus, a right-hand-drive version is unlikely to be made.

As an eco alternative to the most powerful 7-Series, the Hybrid 7 is superb. But in a wider view of the car industry, it struggles to make much sense.

Rival: Merc S400 Hybrid By mating a smaller 3.5-litre V6 to a similar-sized electric motor, the Merc manages to return 35.8mpg, while still producing a healthy 295bhp. It’s nearly £20,000 cheaper than the new BMW, too.