We get a closer look at the technology behind the next BMW 7 Series - and drive a prototype, too 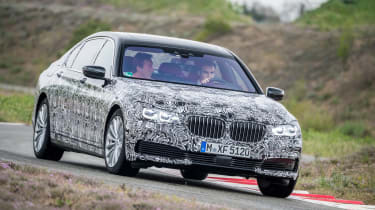 BMW has invested a large amount of brain power to outfox the S-Class when it comes to amazing technology, and it’s fair to say the new 7 Series, due later this year, has some clever gizmos up its sleeve. Remote control car parking and gesture control are the highlights, but a body made from carbon fibre, aluminium and steel helps keep the weight down improving the car’s driving dynamics. As ever the 7 Series offers us the first glimpse at the type of technology we can expect to see on all more affordable BMWs in the future, and on this first impression, the future looks good.

BMW is throwing its engineering might at the new 7 Series to make it knock the Mercedes S-Class off its perch once and for all. The new version of BMW’s much-loved luxury limo debuts a raft of clever technology and industry-first construction materials to take the fight to the all-conquering S-Class. But, just like all 7 Series models before it, the new one showcases the type of technical wizardry that will appear on more reachable BMWs in the future.

Just one of a handful of a UK media invited, Auto Express travelled to BMW’s top secret Miramas testing facility in the south of France to find out more about the technological marvels BMW has devised for its flagship car, six months before its official global reveal at the Frankfurt Motor Show.

The company’s top engineers spilled the beans to Auto Express on the new 7 Series which now bristles with innovative technology like the ability to remotely park itself with no-one behind the wheel, key features which can now operated by gesture control and state-of-the-art carbon fibre building techniques – just some of the tech which you can expect to see filtering down to 3 and 5 Series cars in the next 10 years. 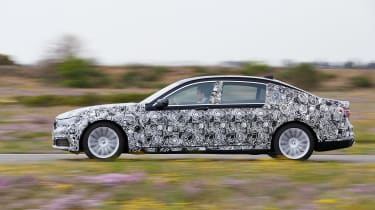 While the new the 7 Series is the same size as the car it replaces give or take a few millimeters, that’s where the similarities stop. The latest generation car is completely new – new materials, new technology and new engines. BMW has started from a blank sheet of paper for its latest car, and it all starts with the way it’s built.

The company’s range of i cars were the first mass-market BMWs to use carbon fibre, and the 7 Series is the next development in the German giant’s fascination in this lightweight, ultra cool material. Key parts of the passenger cell are made from CFRP or Carbon Fibre Reinforced Plastic allowing aluminium and steel to be used elsewhere, reducing weight and lowering the car’s centre of gravity. Overall it means the new 7 Series weighs 130kg less than the old one and around 300kg less than the S-Class. 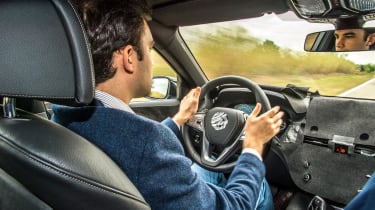 Under the new predictably conservative styling, BMW’s engineers haven’t only been devising new building techniques but also new oily bits. In a move to make this 7 Series appeal to a wider spectrum of customers, it’s also sportier but also more comfortable than the old car.

New Dynamic Damper Control allows the driver to select a range of new suspension set-ups including a new Comfort Plus setting, which delivers a far more cosseting ride than the old car. New rack and pinion steering gives greater feel and precision from behind the wheel and the Driving Experience Control has a new function. ‘Adaptive’ uses sat-nav data and the car’s on board cameras to read the road ahead, automatically setting up the car to deliver the best driving experience – a system not too dissimilar as that used in the Rolls-Royce Wraith. 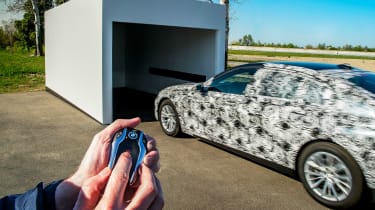 The 7 Series also has a couple of other gizmos to tempt gadget freaks away from the S-Class. The first is just the type of technology James Bond was used to with his 7 Series in the 1997 epic Tomorrow Never Dies – and that’s the ability for the car to drive itself. On finding a tight parking space, the driver just needs to get out of the car, tap a button the key fob and watch the BMW park itself – and the same goes for parking in tight garage filled with bikes and garden tools. It’s the type of technology we can expect to see being offered on all BMWs in the next decade as autonomous driving becomes more accessible.

The other clever tool that aims to make the driver’s life easier and safer is gesture control. Receive a call that you don’t want to answer? Just wave your hand in a dismissive manner to reject it or alternatively point at the new touchscreen in the dashboard to answer it. Twirling your finger in a clockwise or anti-clockwise direction turns up or down the volume of the radio also features. 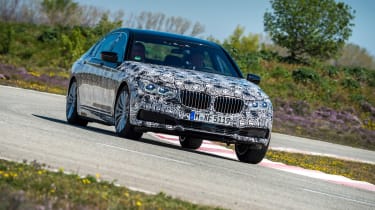 We got the chance to get behind the wheel of the new limo on BMW’s tricky Miramas handling track and it’s safe to say it’s the most dynamically capable 7 Series yet. While our car was a very early pre-production car and a more in-depth road test is needed, the new 7 Series’ comfort levels are more on par with the big Merc than they ever have been. And, being a BMW, it’s also the class’s best when it comes to handling – the new steering and suspension set-ups give brilliant feedback allowing the 7 to handle in a way that belies its size.

A new 3.0-litre turbocharged six-cylinder engine was under the bonnet of our test car, and BMW was tight-lipped on its performance figures. But it promised us that it’s more powerful and efficient than before and delivers blistering straight-line performance; we can the 3.0-litre petrol to be just one of a range of diesels and plug-in hybrids offered in the UK.

Prices have yet to be confirmed for the car, but an insider said that they’d be bumped up to reflect the step-up in technology, so expect the range to kick off at around £65,000 when the car goes on sale in November.