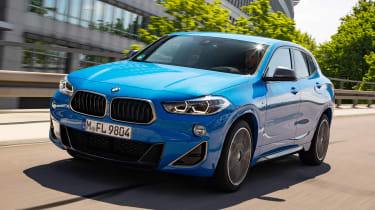 BMW has missed a trick with the new X2 M35i. The maker’s M cars have historically been some of the feistiest, most un-hinged models of their type, but the X2 appears muted and a bit too sensible. It feels like little more than a faster version of the standard car, rather than an M Performance model in its own right.

The small performance SUV segment has gone from 0-100mph in six months flat. The BMW X2 M35i you see here follows the Cupra Ateca and Audi SQ2, and will be joined by the spicy Volkswagen T-Roc R before the end of the year.

It took the world’s car makers a little while to cotton to the idea of quick SUVs, and even longer to match the charm and affordability of a hot hatch to the desirability and practicality of a 4x4. But now they’re coming thick and fast.

For BMW, the X2 was the perfect candidate; the brand’s smallest and sharpest SUV is among the most dynamic cars of its type, handling neatly even in standard front-wheel drive guise. 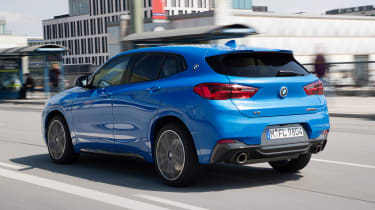 But for the M35i, BMW has ramped things up a notch. It gets the same TwinPower 2.0-litre turbo petrol engine as the forthcoming M135i, mated to the same intelligent xDrive set-up. Like its main rivals there’s about 300bhp on tap, plus a 0-62mph sprint of around five seconds.

It’s well equipped, granted, but that’s not far off what you’ll pay for an entry-level Porsche Macan. And when you consider that car’s far stronger residual values, there’s likely to be little more than a fag paper between them when it comes to monthly finance costs. 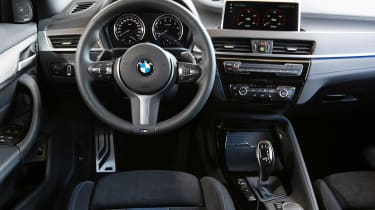 Price aside, the M35i headlines with a plethora of upgrades over the standard X2, including specifically tuned M Sport suspension and mechanical limited-slip diff, as well as a tweaked eight-speed gearbox with launch control.

All this helps the racier X2 feel like a proper pocket rocket. You sit low, and it’s alarmingly quick at times – showing little struggle in hauling well past the three-figure speeds on a stretch of deserted German autobahn. The gearbox responds well in every drive mode, delivering an characteristic thump in the back on Sport-mode enabled full-bore upshifts.

But while the X2 impresses point-to-point, it ultimately lacks excitement. Where the Ateca inherits much of the hot SEAT Leon’s scrabbly, unhinged character, the X2 feels muted and less engaging than the old M140i ever did. Part of that is down to the downsized four-cylinder engine, granted, but even compared with the identically endowed Cupra, the BMW feels a little too sensible for its own good.

The steering is accurate but not brimming with feel, though the standard X2’s squat stance means body control is good. The ride, while compliant enough in Comfort, is likely to be far too stiff for UK roads in Sport, however. The Ateca feels more fluid, and sounds fruitier, too; the X2’s exhaust noise is arguably more authentic, but closer to the standard SUV’s than anything from the brand’s wide-ranging M division.

The same is true of the M35i’s styling. The only clues to this car’s firepower are the Cerium Grey inserts for the grille, air inlets and mirror caps. There’s a set of similarly-specced 20-inch wheels, while the larger exhausts are painted in the same shade of grey. Look really closely and you’ll notice the new M rear spoiler, too. Remove the badges, though, and you’ll need to be a true anorak to separate the M Performance model from its lesser siblings. 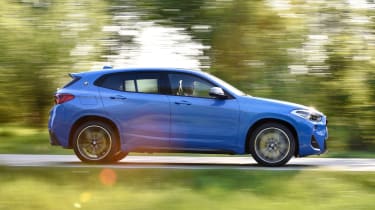 Take a look inside and the differences are even harder to spot. There’s a set of new M Sport seats, M Sport seat belts and a new aluminium foot rest. But that’s your lot. Engine and drivetrain aside, it’s hard to fathom where your cold hard cash is being spent; the X2 M35i costs £6,060 more than an xDrive20i M Sport.

That’s even more apparent when you consider that 20i model boasts the same M Sport bodykit, LED lights, and iDrive infotainment system, as well as a similarly supportive set of heated sports seats.

So its rivals are cheaper to buy, better equipped and more engaging to drive, but does the BMW offer any advantages when it comes to packaging and practicality? Not quite. Despite its raised body, the X2 is no more versatile than your average family hatchback. The 470-litre boot is a decent size, but the cabin feels cramped thanks to the thick C-pillars and sloping roofline. The Cupra trumps it here once again.