We blast-off in the flagship version of BMW's compact SUV 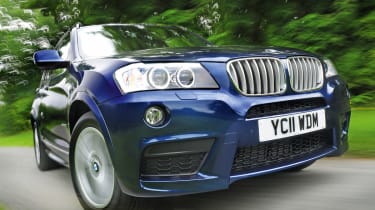 The flagship X3 is a brilliant all-rounder. Whether on a winding B-road, muddy track or family holiday, it performs superbly. The added firepower of the bigger engine provides a sporting driving experience, too. If you can afford it, this car is difficult to resist. Yet most buyers will find the extra outlay hard to justify – so we’d still opt instead for the efficient 2.0-litre turbodiesel.

The new BMW X3 is back with a bang. The SUV originally launched with a single engine option, and took top honours in our class shoot-out in Issue 1,146. But now a flagship version has arrived, and we’ve driven it.
Under the bonnet of the X3 30d M Sport is a thumping 3.0-litre straight-six turbodiesel. Although this model costs £5,790 more than the equivalent four-cylinder, buyers get an extra 74bhp and 180Nm of torque, taking the total outputs to 254bhp and 560Nm.
Video: watch CarBuyer's video review of the BMW X3
[[{"type":"media","view_mode":"content_narrow","fid":"68618","attributes":{"alt":"","class":"media-image"}}]]
Unsurprisingly, this has had a dramatic effect on the X3’s acceleration. Its 0-62mph sprint time tumbles to only 6.5 seconds – amazing for a car this big. It makes a great noise, too.

While the unit isn’t as refined as Audi’s six-cylinder diesels, it’s much more efficient. Stop-start, regenerative braking and an eight-speed gearbox help the X3 to return 47.1mpg combined and emit only 159g/km of CO2.
Despite the big increase in performance, the M Sport styling is quite subdued, with additional chrome trim on the grilles and exhausts, smart 18-inch alloys and beefier side sills the only visual hints to its blistering pace.
Most of BMW’s M Sport models get stiffened suspension, which can make them uncomfortable for daily use. But our car came fitted with the optional Variable Damper Control (£930), which works with the Dynamic Drive control system to adjust the suspension to your driving style and the road conditions.
In Normal mode, this translates to a supple ride and accurate, light steering, making the car very easy to drive. Switch to the Sport setting, and it sharpens up throttle response and provides weightier steering, while Sport+ limits the traction control and reveals a chassis that’s amazingly agile. There’s barely any body roll, and the lofty ride height means that you can tackle bumpy back roads at considerable speed.
The cabin feels extremely well built, although the swathes of black plastic give the X3 more of a utilitarian flavour than rivals such as the Audi Q5 and Range Rover Evoque.
Still, it scores points for practicality – few cars this fast can also swallow 550 litres of luggage, and the wide, tall rear doors mean plenty of space for rear passengers, too. It all adds up to a very convincing package.