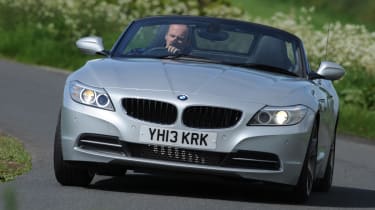 It looked sporty and had a range of powerful engines, but the BMW Z4 was more of a comfortable cruiser than a sharp sports car. The rear-wheel drive layout delivered balanced and engaging handling, but a soft suspension set-up meant it never felt as responsive as a Porsche Boxster or Audi TT. M Sport models featured a stiffer suspension set-up, but the trade-off was an extremely firm ride.

Unlike the Audi TT or Mercedes SLC, there was no super-frugal diesel version, but the BMW’s petrol units were powerful, smooth and respectably efficient. The last round of design tweaks kept the Z4 looking fresh, but nothing was done to fix the compromise of the roadster’s metal top, which took up far too much boot space when stowed. Overall, it was an open-top sports car that promised plenty, but delivered too little to make an impact in the class.

The BMW Z4 was a competitor to popular roadsters like the Audi TT Roadster, Mercedes SLC and Porsche Boxster. The second-generation car was originally launched in 2009, and it was given a subtle facelift in 2013 to try and keep up with newer rivals.

The original Z4 was in production from 2002-2008 (it was a replacement for the Z3 roadster), but unlike that car, the second-generation featured a complex folding metal roof that helped make the BMW more refined and secure than fabric-roofed rivals. However, the electrically powered mechanism added weight and reduced luggage space when the top was stowed.

In-keeping with BMW tradition, the Z4 had a traditional front-engine, rear-wheel drive layout, and power came from a choice of turbocharged four and six-cylinder petrol engines. The range comprised the entry-level 154bhp 2.0-litre in the sDrive18i, the 181bhp version in the sDrive20i and a 241bhp sDrive28i, while a 3.0-litre straight-six was used in the 302bhp sDrive35i and 336bhp sDrive35iS.

The Z4's two-seater cabin featured a suitably upmarket finish. Top quality materials were used throughout, although it was beginning to look dated towards the end of the car's like, but the snug two-seater cabin had real premium appeal.

All cars bar the sDrive35iS were offered in two trim levels, standard and M Sport, but even the most basic model wasn't short on kit. Climate control, 17-inch alloy wheels, DAB radio, Bluetooth connection and xenon headlamps all featured.

Go for an M Sport model, and extra kit included larger 18-inch wheels, a muscular bodykit and leather trim for the seats, while the flagship 35iS added adaptive damping and a seven-speed DCT twin-clutch gearbox. All models got a six-speed manual or an optional eight-speed automatic. The exception was the 35i, which was available with the same DCT unit as the 35iS.