We drive the facelifted BMW Z4 in its most potent guise. Can it still compete with the class-best? 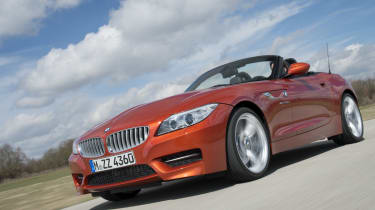 Few sports cars age as well as the Z4 has and the flagship model still has more than enough style and performance to get the blood pumping. The new interior tweaks and optional trims keep it feeling special inside and although it lacks the dynamic finesse of its rivals the 3.0-litre engine provides a fantastic hard-edged soundtrack. However the sDrive35is is not the best new Z4 in the range and at over £45,000 looks expensive.

Time has been kind to the BMW Z4 and as a testament to its enduring good looks after nearly four years on sale BMW has kept the changes light for the second facelift.

A new entry-level model joins the range to rival the basic Audi TT 1.8 TFSI, but the version we are testing here is the range-topping sDrive35is that competes directly with big hitters such as the Porsche Boxster S and Mercedes SLK 55 AMG.

Three new colours are available including the striking Valencia orange hue of our test car and if you opt for the contrasting black finish for the folding hard top then the Z4 still has the power to turn heads with the metal roof up or down. Other visual tweaks to the exterior include new circular LED running lights for the whole range subtle chrome trim for the grilles and side indicators, plus a slim white ‘eyebrow’ line that has been added to the top of the main headlight cluster.

These minor changes do just enough to keep the Z4 looking fresh and the new Pure Design traction package pulls off the same trick for the luxurious interior. This option bundle adds Alcantara and leather trimmed seats with Lamborghini-style orange stripes down the centre plus a ‘metal weave’ trim for the dash that looks fantastic and gives the sturdy (if cramped) interior a real sense of occasion.

New gloss black plastic inserts along the centre console and air vents improve the feeling of quality inside but some parts of the Z4’s cabin are starting to feel past their best. The side pockets of the doors are made of hard cheap plastic and the dot-matrix display nestled between the grey dials looks two generations old. Still major touch points like the sports seats and thick-rimmed ‘M’ steering wheel add a good sense of occasion and the growl from the 3.0-litre twin-turbo straight six on start-up is addictive.

The rest of the Z4 range gets either a six-speed manual or eight speed auto gearbox, but the flagship sDrive35is uses the same seven-speed M DCT transmission from the M3. Gear changes using the paddles on the steering wheel are fast and smooth and allow you to wring the most from the muscular engine – which pulls strongly right up to the 7,000rpm redline.

On our de-restricted German test route we easily reached speeds of 160mph before the electronic limiter stepped in but on winding roads the Z4 feels less accomplished. The steering is a little vague and numb and as a result it is difficult to place the car accurately on the road and despite the standard adaptive springs you can feel some flex in the chassis over rougher roads.

It’s still exciting to drive but lacks the precision of newer rivals like the new Boxster. There are other niggles too, as the folding roof really eats into the luggage space – which is just 180 litres with the top stowed – but offers no better refinement than the latest fabric soft-tops. It can be operated at speeds of up to 25mph but the complexity of the design does mean the Z4 feels heavier than some of its competitors.

However thanks to some EfficientDynamics technology the Z4 still manages an official economy of over 30mpg while carbon emissions are pegged at 210g/km. So while it may not be the class-leader when it comes to driving the BMW roadster is still a very accomplished all-round cruiser.