There’s life in the old hatchback yet in spite of all the new SUVs, says editor-in-chief Steve Fowler 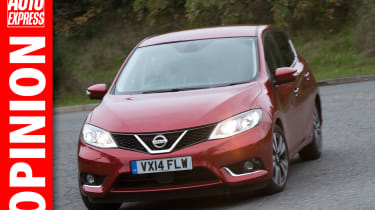 New SUVs continue to arrive thick and fast, with even more due. And when we talk to the car makers about the models in demand… yup, you guessed it, the longest waiting lists are for SUVs.

So it’s no surprise that Vauxhall is looking to replace its Meriva and Zafira MPVs with cars with a bit more SUV style – although it’s calling them CUVs, standing for Crossover Utility Vehicles.

But while it’s those cars grabbing the headlines, it’s still the humble hatchback that’s grabbing sales. Checking the charts for the year so far, the Ford Focus sits in second place behind the Fiesta, the VW Golf is in fourth, the Vauxhall Astra in fifth and the Audi A3 in eighth. The highest SUV? The Nissan Qashqai in sixth place. No other SUV gets into the top 10.

Given those figures, it’s no surprise that Nissan decided to jump back into the mainstream with its all-new Pulsar hatch. It’s really rather good, but then so is the latest Ford Focus (although the thought of a £25,000 Focus with a 1.0-litre engine is just bonkers, no matter how much clever tech it has on board).

Next up is the new Vauxhall Astra with a sexy new look and, like the Focus, plenty of tech on board, including Vauxhall’s own 1.0-litre engine.

It’s the big fleets that are fans of hatchbacks, so demand will stay strong. However, the SUV market is more fragmented with a wider choice of models. Add them together and I don’t think you’d be far off the figures for hatchbacks. And SUV sales are only going one way – up.

Would you choose a hatchback or an SUV for your next new car? Let us know your thoughts in the comments below, on Twitter or on Facebook...