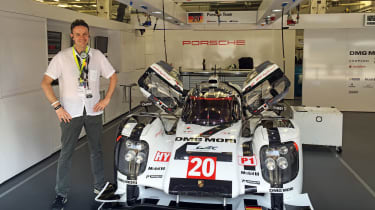 It’s been an exciting year for motorists, with a whole host of exciting new car launches, reveals and reviews taking place throughout the year - and we've been there bringing you the latest news, reviews and features throughout 2014.

There's been such a vast array of stories that we couldn't possibly recap them all, but the Auto Express team have outlined their best bits of the past year - be it becoming an auctioneer for a day, taking part in our annual fast car shoot-out, directing our New Car Awards shoot or interviewing some of the leading lights of the automotive industry.

It's certainly been a varied and exciting year for car fans, so scroll down to find out what our favourite moments were...

It's not often you get the access I was afforded from Porsche when I travelled to Bahrain in November to research a feature on the company’s Tech Transfer from race track to road cars.

But as the Gulf state is one of the less popular stops on the World Endurance Championship, there were few media and fans there – which meant I was able to speak at length to the brand’s executives and race drivers.

A hot lap with Mark Webber in a Panamera was pretty memorable, as was a grid walk prior to the start of the race. However, the real highlight was being allowed to examine the 919 racer in the pit garage an hour before the Six Hours of Bahrain blasted off.

It provided an unparalleled insight into the tech that’s set to feature in Porsche road cars in the next decade.

Tackling the ’Ring for the first time 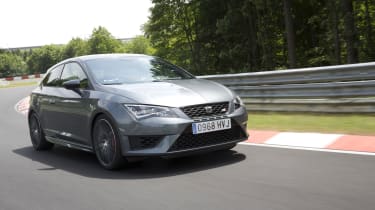 I should've lapped the Nürburgring years ago; I drove all the way there to do a university magazine feature, only to find it under six inches of snow. So it was a lifetime ambition fulfilled when I completed two laps in the new Renaultsport Mégane 275 Trophy in June, with rally legend Jean Ragnotti showing me the lines in a car in front. I pinched myself when SEAT invited me to drive the track again, that afternoon, in the Leon Cupra. I can’t remember all 70-plus corners, but I’ll never forget that day. 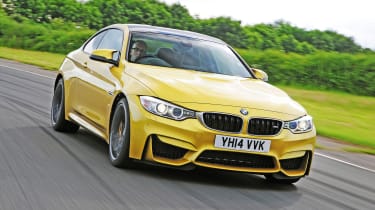 Not all new-car launches are equal. BMW is well known for its drive-back events, in which you get flown to a location in Europe and then drive home. This gives a valuable opportunity to test the car over 1,000 miles on your choice of roads rather than on a prescribed route. I tried out the new M4’s top speed on an autobahn and handling on the Nürburgring before assessing the ride on battered UK roads. See a film of this epic trip here. 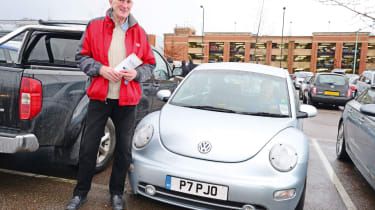 Are UK drivers in denial about depreciation? That’s what we asked when we teamed up with trade expert CAP’s Philip Nothard, quizzing drivers in Suffolk on how much they thought their car was worth. Many overestimated by thousands, while others were more realistic. My highlight of the year was the look on the face of a VW Beetle driver when we told him he’d undervalued his car by a huge £2,600! 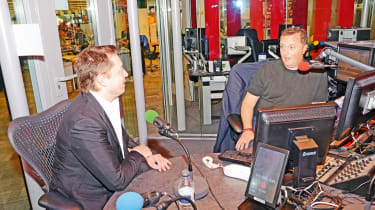 I’d been looking forward to meeting Tesla CEO Elon Musk for a long time, so when the opportunity to interview him for Auto Express and BBC 5 Live came up, I jumped at the chance. He came across as warm and intelligent with a great sense of humour, especially when he told me he thought Ford was “killing sex” by not letting Tesla use the Model E name to go with Model S and Model X.

He’s very honest, too – revealing, when asked, the name of Tesla’s third car, the Model III, which turned out to be one of the biggest motoring stories of 2014. 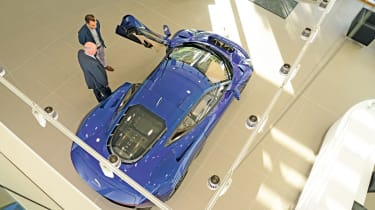 Before I went to Williams Advanced Engineering in Oxfordshire, I thought Williams was purely about F1. Sure, I knew that it had worked on Jaguar’s C-X75 hypercar, but I didn’t realise the scale of the operation.

MD and perfect host Craig Wilson was quite happy to spill the beans on what goes on behind closed doors. With makers queuing up to have Williams develop their technologies, it was great to see a Brit firm being the go-to place for the world’s car brands. 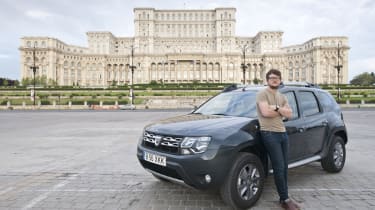 Dacia has taken the UK by storm since making a return at the end of 2012, so I couldn’t wait to head to the company’s birthplace, Bucharest in Romania.

It was easy to see why the budget brand has come so far and is selling so well here in Britain. The cars may be affordable, but everything that goes on behind the scenes is as modern as with any other manufacturer in Europe. Even its dealers have been given huge overhauls, while it employs designers from all across the world, too.

What really stood out on our trip, though, were the various different Duster and Logan models that you could get, from the ambulance to the snow plough – and even a military version with full machine gun on top. 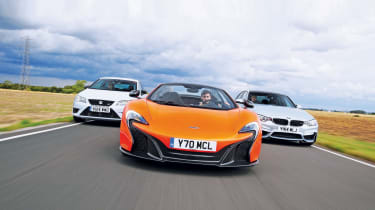 Our annual fast car shoot-out is a must-read for drivers seeking out the biggest thrills. In 2014 we named our top 100 performance heroes, before hitting road and track in 10 of the best. Porsche’s sublime Cayman GTS took overall honours. Its razor-sharp handling and exhilarating performance never failed to raise a smile, while the spine-tingling bark from its flat-six engine added to the drama.

Yet the Caterham 160 provided the biggest surprise. Despite its diminutive 80bhp three-cylinder engine and skinny tyres, the tiny two-seater was in constant demand, as both novices and skilled drivers revelled in its infectious, fun-loving character. 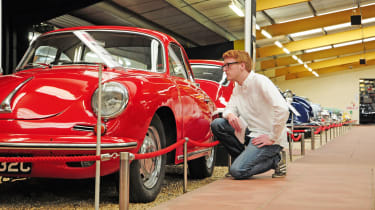 I live and breathe classic cars, so when I was invited to look around the newly revamped Haynes Museum in Yeovil, Somerset, I couldn’t get there quick enough. After a multi-million-pound renovation, the design of the building had been overhauled and given a new lease of life.

The roster of vehicles hadn’t changed, but what was on display was impressive – including a Porsche 356 and Ferrari F40 among other timeless classics. I’ll never forget the tour, yet the individual cars on show will live even longer in my memory. 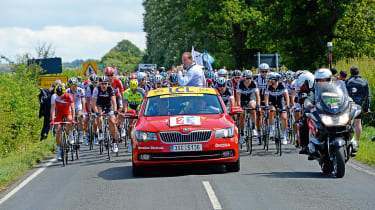 We're lucky enough to drive and review some of the best new cars around. However, for me, the highlight of 2014 actually came from the passenger seat of a Skoda Superb, as I was transported from Cambridge to London right behind the lead peloton for the third stage of this year’s Tour de France.

What’ll stay with me is how the world’s top cyclists manage to take some of the corners faster than I’d feel comfortable doing them in a car. A once-in-a-lifetime opportunity that I won’t be forgetting in a hurry. 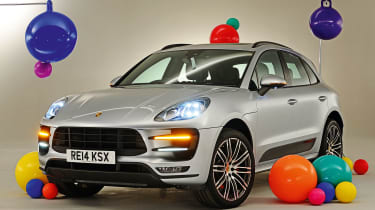 Directing our New Car Awards shoot is something I always love. It’s a great opportunity to get some extra colour and creativity into the images of our award-winning cars.

I’ve always admired the old Sony Bravia TV advert with the bouncing balls. So I tried to capture that sense of colour, but this time using different-sized balls to play about with scale across the 22 images. We used space-hoppers, various-sized footballs and ball-pit balls, taking time to contrast the colours and reflections in each image.

Some were hung from fishing line, others taped to lighting rigs. The results were a series of images senior photographer Pete Gibson and I were proud of... and the balls were donated to local kids’ charities. 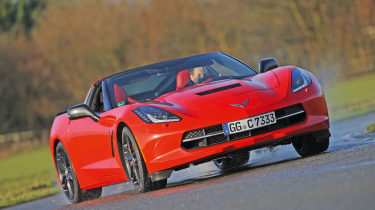 As a fan of American muscle, I found the chance to drive the latest Corvette Stingray in the UK at the start of the year too good to miss. The combination of grim January weather and a 455bhp V8 with rear-wheel drive could’ve been the car’s downfall, but it proved surprisingly capable. A decent chassis and eager responses made it enjoyable to drive and one of the more pleasant surprises of the year. 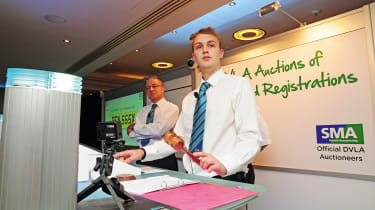 I must confess I’m a secret fan of TV auction shows, so to get to be the man with the gavel selling personalised plates was great. As stage performances have never been my strong suit, it was daunting to stand up in front of a room full of auction experts and number plate dealers. In fact, the auction team admitted afterwards they’d had suspicions before I arrived that I wouldn’t do it. However, once I was behind the podium it felt natural, and I made £2,000 for the DVLA. Finally, all those hours in front of the TV paid off!

What was your highlight of 2014? Let us know in the comments below...