"It’s easier, cheaper and less stressful to own an LPG car than a pure EV" 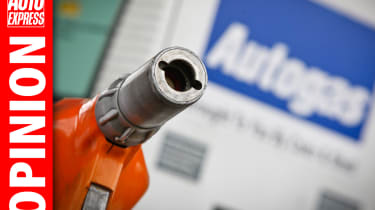 The best and most convenient ‘alternative fuel’ in 2015? Some (usually those with compounds full of dusty rechargeable cars they’re obviously struggling to sell) will mischievously argue it’s electricity. Ignore them. All things considered, it’s easier, cheaper and less stressful to own and run a liquid petroleum gas (LPG) car than a pure EV.

True, LPG has been on the fringe for decades and has an (undeserved) image problem. This is partly because it goes by a variety of confusing names – LPG, LP gas, propane, butane or autogas – and partly because it’s been marketed far too quietly and apologetically.

Remind yourself of the following and you won’t go far wrong: LPG/autogas does much the same job as petrol/gasoline or diesel/derv... but for less money!

• Drivers back LPG as industry calls for help

Here’s a fuel that (unlike electricity) is rapidly dispensed via widely available pumps on conventional forecourts. It’s comparatively clean. And if you’ve got, say, a big, old petrol-guzzling Jag or Jeep with life still in it, it can be converted to run on LPG in hours. What’s not to like?

Companies such as Volvo and Vauxhall used to build and sell fresh- from-the-factory LPG cars to UK buyers. And while the former says it stopped making them due to infrastructure issues with the fuel, big improvements in petrol and diesel consumption and its diversification into hybrid technology, the latter suggests politicians simply put the boot in on LPG.

“Yes, we did build them and sell them in Britain,” Vauxhall told me. “And they sold fairly well – until the Government pulled the plug on the fuel incentive, then they nosedived.”

It’s almost as if the politicians have quietly attempted to murder what is still the third most popular vehicle fuel in Britain. Shame on them.

But they have time to redeem themselves. The incoming Government, due to take office in May, could and should withdraw its OTT £5,000 handout to buyers of expensive pure-electric cars and instead offer subsidies of around £1,000 to motorists keen to invest in aftermarket LPG conversion kits.

Better by far to aid five comparatively poor existing owners of old, thirsty petrol-powered cars than one motorist buying a pure-electric – and therefore in possession of more money than sense.

Would you buy an LPG car over a pure EV? Let us know in the comments below...