Cheap as chips: how to buy a banger and run it for peanuts 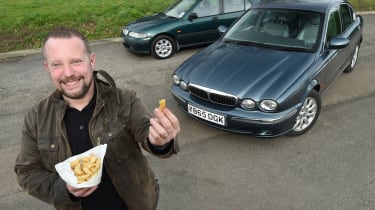 The experience of owning an old banger can go one of two ways. You either save a fortune over the cost of running a modern car, or you endure constant frustration and concern when you climb behind the wheel about whether or not you’ll make it to your next destination.

In 22 years of driving I’ve owned a succession of cheap motors, and it’s all my father’s fault. When I was growing up, my dad never spent more than £1,000 on a car. Some were brilliant – the Ford Cortina 2.0 GLS stands out – and others, such as our Vauxhall Carlton estate, were so unreliable you’d have sworn they were possessed.

Others surprised us. There was the £900 Fiat Panda that our family took from 35,000 to 138,000 miles, via three learners, with little more than servicing before it succumbed to corrosion. And what about the £200, orange Austin Allegro, which was a faithful and robust companion through several years of financial hardship? The colourful world of old-shed ownership has rubbed off on me, to the extent that I’ve just handed back the keys for my 2014 BMW 318d to the leasing company, to return to the days of bangernomics.

Understandably, that’s not a move many people are brave enough to make. To many motorists – and with very good reason – the allure of a new or nearly new car is part modernity. But it’s much more the security of a warranty, of knowing it’ll get you from A to B without arriving at journey’s end on the back of a recovery truck, and of a fixed payment of £200-£300 a month keeping a cap (and a sensible level of control) on your motoring costs. 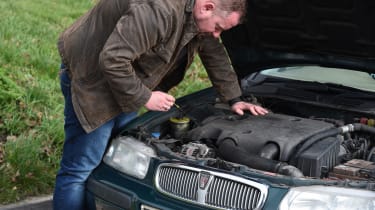 Then there’s the fact that modern cars are generally more comfortable, more efficient, safer and easier to drive than their older equivalents. There’s a lot to be said for being whisked from one location to another in comfort, with no clonks or rattles. And for knowing that if the motor breaks down, the dealer will take care of it under warranty, and the parts will also still be available. My way round this is to run multiple vehicles. My logic – if you can call it that – is that if one of them isn’t working, chances are another one is. It’s a different way of looking at things, but isn’t without merit.

After all, today’s bangers are not like the clapped-out heaps of old. Buy a car from the early 2000s and you’ll most probably get something with reasonable reliability, plus a decent sound system, air-conditioning and capable road manners. Indeed, one of my current ‘sheds’, a Jaguar X-Type, is better equipped than the £31,000 BMW 3 Series I’ve just handed back. And it cost me the same to buy outright as a month-and-a-half’s lease payments.

There are, though, certain things you need if you’re going to drive bangers in earnest. The first is an understanding of how a car works, and what bits you need to keep on top of to keep them running. I enjoy tinkering, so it’s not an issue to spend an hour a week under the bonnet, checking fluid levels, hoses and belts for signs of imminent problems. 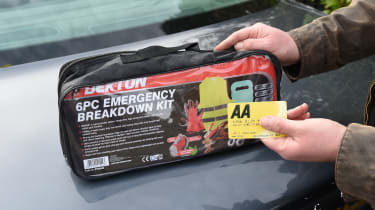 You also need a comprehensive breakdown policy with full home start and get-you-home cover. There’s no point risking anything else, as the amount you save in motoring costs will easily pay for the best policy. A mentality that stops you from getting sentimentally attached to the car (or cars) you’re running is helpful, too. That’s the one I struggle with.

Above all, you need to buy sensibly. When you’re spending less than £1,000, condition and maintenance history are far more important than make, model or spec – although if you have your heart set on a particular car, why not treat yourself? It’s not as if you’re risking a huge amount, after all. 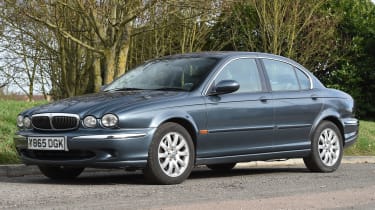 I always liked the X-Type. Indeed, I covered its launch for Auto Express in 2001. At the time, it was criticised by some for its Mondeo underpinnings. Today, the number of Ford parts on it are a blessing, as they’re cheaper than Jaguar’s.

I bought my X-Type from a friend, whose dad had owned it since it was a couple of years old. It has 106,000 miles on the clock and a full service history, along with a chain-driven cam – so I don’t need to worry about a cambelt change. It costs more to fuel and tax than most cars, but this is easily offset by the pittance it cost me to buy. Furthermore, it has heated seats, an automatic gearbox, heated windscreen, four-wheel drive and cruise control.

It’s a terrific way to travel, and just as lively today as when new. I use it for most of my longer trips, where comfort is key. 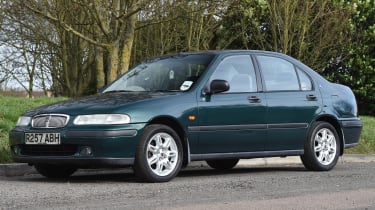 It’s not sexy, it’s not in great condition and it isn’t, by any stretch of the imagination, quick, but my trusty old diesel Rover cost me about the same to buy as a family meal out.

It’s not a bad old bus, either. It has covered only 93,000 miles from new, or less than 6,000 per year, and has a fairly comprehensive service history. Also, the bloke I bought it from was a mechanic who’d just changed the cambelt and given the 420 a full service.

The cabin is shabby, the headlining held up by drawing pins, but it’s one of those cars that will always start, whatever the weather. It’ll get you where you need to go, in relative comfort. It’s a proper shed, and I only really use it for local duties where its economy makes a big difference to the Jaguar’s. But it has charm – and the air-con still works!

Have you had any memorable banger experiences? Let us know in the comments below...