Although no longer on sale, the Insight remains one of Honda’s most significant and impressive cars. 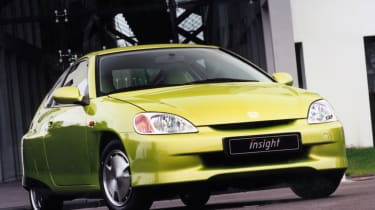 Although no longer on sale, the Insight remains one of Honda’s most significant and impressive cars.

Indeed, this was the first hybrid to arrive in the UK, in 1999; it’s just that arch rival Toyota stole the limelight with its Prius soon after.

The Insight was a three-door, two-seater hatch, and was incredibly lightweight at only 838kg. Even air-con was an option, to keep weight down and maximise economy.

Yet despite its pioneering status, the car is perhaps better remembered for its wacky design. The teardrop body and hidden rear wheels made it aerodynamic and immediately recognisable, like nothing else on the road at the time. 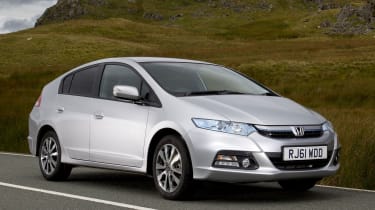 Beneath the futuristic panels sat a 67bhp 1.0-litre three-cylinder engine paired with a 13bhp electric motor. Honda claimed hugely impressive 69mpg economy, and when the Mk2 car arrived in 2009, great things were expected.

Yet despite the 10-year gap between old and new, and some technological advancements, not much progress seemed to have been made. In fact, this most recent Insight returned 68mpg from a 1.3-litre petrol engine and electric motor.

What had changed was the styling. The spaceship look had made way for a more conventional five-door hatch. Perhaps what was missing, and why this Insight couldn’t replicate the Mk1 car’s success, was the lack of flair and ingenuity for which the original had become famous.