The latest from the 2016 SEMA show, known as the largest and craziest modified car show in the world 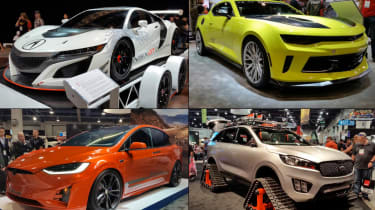 Opening today and running until Friday 4th November 2016 at the Las Vegas Convention Centre, the SEMA show is a trade event where tuners and parts distributors can buy and sell products. While that might not sound exciting, the insane diversity of vehicles on display are unlike anything you'll see at motor shows such at Paris and Geneva.

As always, there's a big presence from US manufacturers, but this year Hyundai, Kia, and Toyota (among others) are making a sizeable impact on the show floors. Here's our round up of the big debuts. 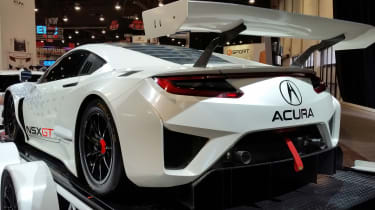 SEMA is all about the weird and wonderful and you could probably argue that this Acura twin act has bits of both. To accompany the newly announced NSX factory GT3 racer, the brand's MDX SUV has been given a matching paintjob and some visual racing bits like a huge chin spoiler, black alloys and lowered suspension. 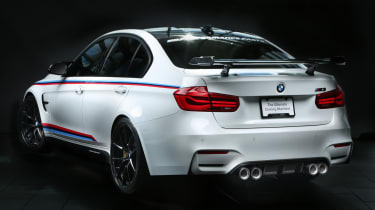 BMW is bringing a range of its M cars to show off all of the additional bits and bobs you can bolt onto them. Along with the M2 Safety Car that we've already seen, the BMW is demonstrating these parts on an M3, X5, a 340i and on a 740e xDrive.

The M3 show car is fitted with a carbon fibre rear spoiler that BMW claims "brings motorsport aerodynamics to the streets". It's also fitted with a new lightweight alloy wheel design that is expected to go on sale for the M2, M3 and M4 in summer next year. 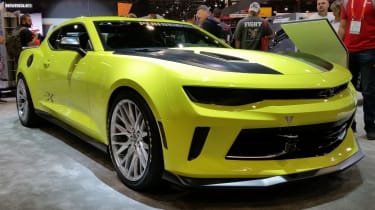 Chevy is also out to prove that its lesser-powered 2.0-litre Camaro model can still cut it. The concept, dubbed the AutoX, has lowered sports suspension, 20-inch wheels and a concept "plus performance" pack that consists of chunky strut braces, a larger anti-roll bar and stiffer suspension links to aid cornering. Other modifications like a sports exhaust, short-throw manual gearbox and a Bose stereo system also feature. 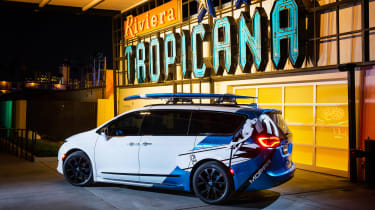 It seems that Chrysler's Pacifica Minivan/MPV has been driven straight through a Mopar warehouse, as this Cadence concept has been fitted with a huge range of accessories, from a paddleboard carrier to a pet kennel and even conductive smartphone charging. Plus, to make it stand out even more, it features some custom graphics and black 20-inch alloys. 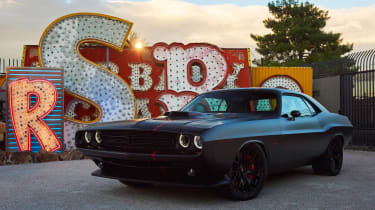 Meet the Frankenstein Challenger! This one-off Shakedown Challenger concept is a blend of old and new, as it uses the original Challenger body from 1971 as a base with modern-day Challenger parts fused into it. Under the functional Shaker bonnet scoop is a 478bhp 6.4-litre HEMI V8 with 21st century electronics, the chassis is all-new, while inside has touches like a steering wheel and seats from a Dodge Viper. 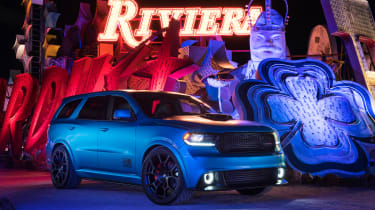 Dodge's six-seat Durango SUV has been given some oomph. Like the Challenger concept above, this Durango has a 6.4-litre HEMI V8 with a functional Shaker bonnet scoop, along with an eight-speed auto and Performance SRT brakes to slow the big beast down. It also looks considerably cooler than most family SUVs. 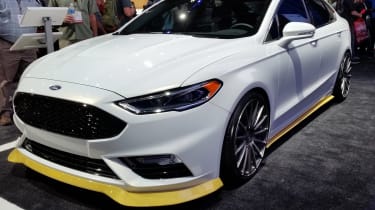 Among a host of debuts Ford is showcasing two Fusion Sport concepts at SEMA - we know the Fusion better as the Ford Mondeo. The most striking show car is the Fusion Sport Ballistic by Webasto Thermo and Comfort North America. Both Fusion models receive bodywork upgrades and tweaks to release more power from the 2.7-litre Ecoboost turbocharged V6. 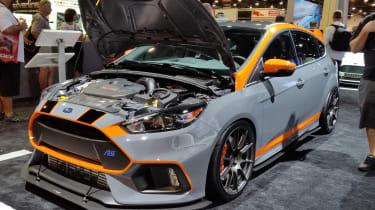 Ford ups the ante even further on its hot hatchback range, with an array of modified versions of the Focus ST, Focus RS and Fiesta ST. Highlights include a Focus RS uprated by Roush to produce 493bhp, while Tucci Hot Rods has also doubled the output of the stock Fiesta ST with a raft of upgrades. 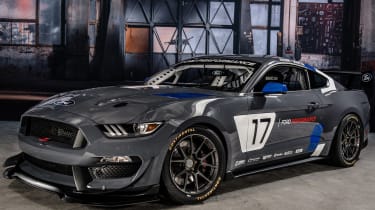 Ford has two very different V8 powered models at SEMA as well. The Mustang and the F150 pick-up are both shown in various guises with different tuners contributing. Ford will show a stock Mustang fitted with the brand's performance pack, alongside an MRT Mustang with extensive chassis revisions and an 825bhp supercharged Mustang built by Speedkore Performance Group. There's also the debut of Ford's own factory GT4 racer (above).

Four F-150s are on display at SEMA, with the wildest called the Era Thr3 and equipped with a supercharged 750bhp 5.0-litre V8. There will also be some wild paintjobs and kitted-out loadbays to draw in the crowds. 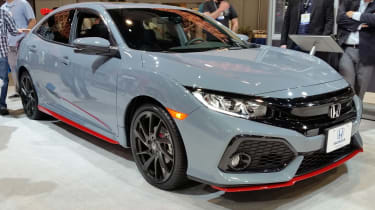 Honda wowed the North American audience at SEMA with its first debut of the new Civic Type R concept after Paris. To bring things back down to earth a bit, the regular Civic hatch gained a concept 'Performance Pack'. Likely to make production, it consists of a subtle red bodykit and minor styling tweaks to rival VW's 'R-Line' trim level. 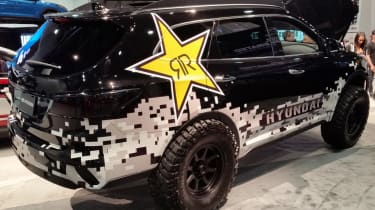 Hyundai has brought along not one but two modified Santa Fes at SEMA 2016. The first was created by Rockstar Performance, with a 3.3litre V6 modified with nitrous injection and 35-inch specialist off-road tyres. 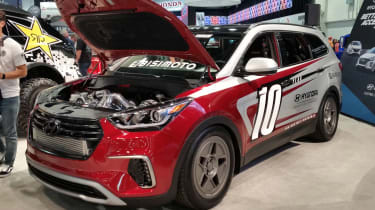 The second Santa Fe is as far from an off-road version as possible. Created by Bismoto, this family SUV features a monstrous 1,025bhp from a heavily modified 3.8-litre turbo V6. Power is sent through the rear wheels, while the car has been 'slammed' and features a race livery. 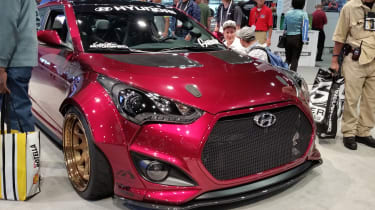 Described as a race-ready version of the (now defunct in the UK) three-door coupe, the Gurnade Veloster gets completely redesigned bodywork, lower suspension, serious-looking alloy wheels and a custom rear spoiler. We know it's also been turbocharged with a reflashed ECU, but no power outputs are given. 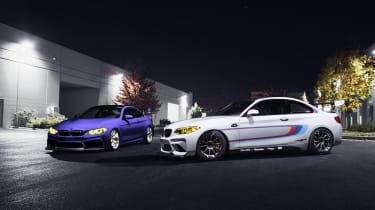 The BMW tuning boffins at IND have revealed these two modded M cars for this year's SEMA show. The M4 comes in blistering purple and is fitted with a fixed rear wing and beefed up front and rear splitters. The M2 comes in a classic BMW themed livery, upgraded brakes, an Eisenmann sports exhaust system and carbon fibre front splitter.

Like the Shakedown Challenger, this Wrangler CJ66 is a mix of old and new. Based on the body of the original 1966 version, the wider chassis of the 2004 TJ Wrangler and featuring styling elements of the latest model, this mountain muncher has a 5.7-litre HEMI V8 producing 378bhp and massive 35-inch tyres. 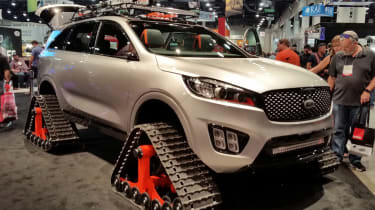 Do you want a Kia SUV but live on top of the Alps or the Rockies? Good news! This self-driving Kia Sportage comes fitted with enormous track, for your next ski slope run, and a huge roof rack. The interior has custom door panelling, black and orange leather and a waterproof Line-X coating to protect against the inevitable onslaught of ice and snow that a normal Sorento doesn't experience on the A34. 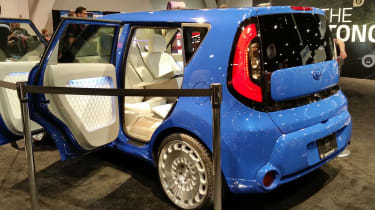 This Soul is all about balancing your work and social life, apparently. It's fully autonomous, to the extent that it doesn't have a steering wheel, and features two rear-facing business-class seats and a massive 40-inch LED TV connected to a Mac mini and a premium audio system. 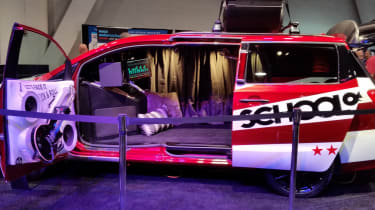 If you have any budding musicians in your life, this could transport them from gig to gig with ease. This self-driving minivan/MPV is essentially a rolling recording studio; there's high-grade soundproofing, storage spaces for guitars and the like, plus "an imposing set of amps" built into the tailgate for any impromptu gigs while out on the road.

In other news, the Kia Telluride concept SUV is also at the show. 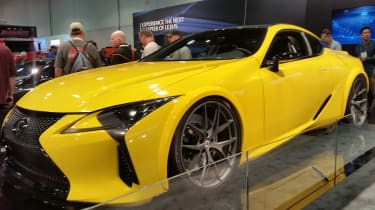 Lexus's sleek LC500 sports GT is a relatively new debut in its own right. That makes it a prime target for a big tune up, in this case courtesy of Japanese tuner Gordon Ting. The racing-inspired build features custom bodywork all-round, a hydraulic lift suspension system, 22-inch wheels and a GT3 spec roll cage. Oh, and the existing 4.7-litre V8 has been bored out to 5.6-litres, with 520bhp. 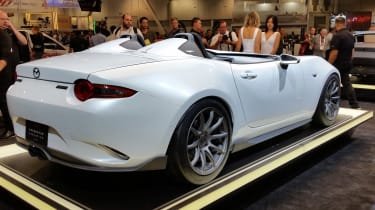 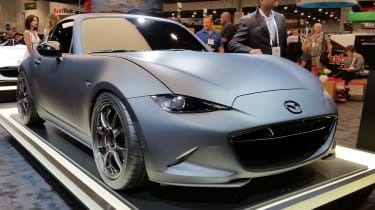 The Spyder model has morphed into the MX-5 RF Kuro; a Retractable Fastback model with a unique semi-matte black paintjob. In case you were wondering, "Kuro" means "charcoal" in Japanese. 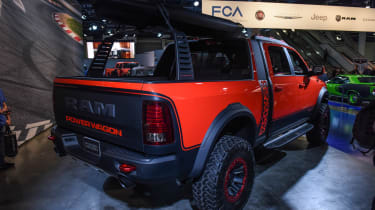 It wasn't going to be long before we saw a modified pick-up at SEMA, and this Ram Macho Power Wagon. Along with what sounds like the manliest name in history, this enormous machine has loads of Mopar parts fitted to it, a 'RamRack' roof storage system and a 6.4-litre HEMI V8. 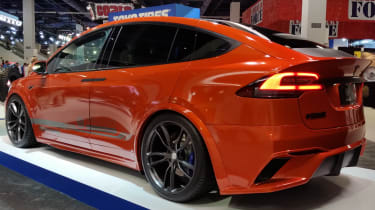 Toyo Tires is going all out at SEMA 2016 with a huge number of unique cars and concepts, but the highlights include this insane Tesla Model X fitted with a widebody kit and a lurid orange paint scheme. It's also fitted with Unplugged Performance sports suspension, lightweight forged wheels and six-piston Brembo brakes. Ludicrous Mode, as you'd expect, is onboard, too. 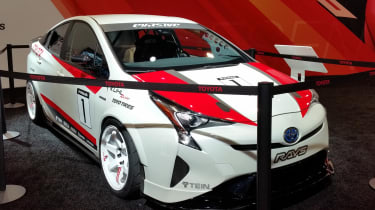 Toyota is out to show the automotive world that a Prius can be more than Uber's go-to ecobox. Like the Lexus LC500 above, this racy Prius G has been designed by Gordon Ting, and its host of chassis modifications means it's apparently capable of nearly 1G on the skidpan (that's Nissan GT-R levels of grip). 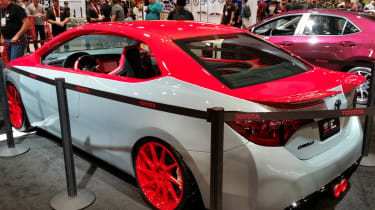 Like the Prius, Toyota has again taken a car of humble origins and elevated it into prime tuner status for SEMA 2016. This Corolla 'XTREME' sees the four-door saloon turned into a two-door coupe, with totally bespoke bodywork, with half-height doors and a raiser shoulderline by Cartel Customs.

Which of this year's SEMA show stars is the highlight for you? Let us know in the comments...