The Cloverleaf badge is one of the world’s most famous emblems. Now, after years gathering dust, it has been reborn on a high-performance Alfa MiTo 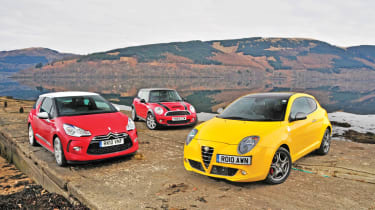 Alfa Romeo is on the comeback trail. Not many performance badges come wrapped in as much history as Cloverleaf – and after nearly a decade on the sidelines, it’s returned with a vengeance.

The name features on the latest range-topping MiTo, which is powered by a 170bhp version of the Italian company’s new 1.4-litre MultiAir engine. But the MiTo Cloverleaf has a really tough job on its hands – because it goes head-to-head with the MINI Cooper S. And the Alfa isn’t the only newcomer with the retro-styled, British-built model in its sights.

We have already been impressed by the Citroen DS3 after a 118bhp version ran the lesser MINI Cooper close on its road test debut in Issue 1,103. Here, we test the more powerful DSport model, which promises to be a serious contender for honours. But does that spell bad luck for the four-leaf Alfa Romeo?

It has taken rival manufacturers nearly a decade, but the MINI has finally met its match. The bad news for Alfa Romeo is that it doesn’t arrive in the shape of a MiTo. While the Italian hatch fully deserves to wear the four-leaf logo, it finishes in last place here. The Cloverleaf is distinctive and features a powerful new engine fitted with the latest economy boosting hardware.

The trouble is, it looks expensive compared to the Citroen and isn’t as sharp to drive as the MINI.

The MINI and Citroen are very different cars; while the Cooper S focuses on dynamic excellence, the DS3 sacrifices some of this sharpness for the sake of comfort. And although the MINI is clearly more rewarding on twisty back roads, the rest of the time it feels compromised next to the bigger and more refined Citroen.

If you want the best driver’s car and don’t mind the retro style, cramped interior and unforgiving ride, the Cooper S is still the number one choice.

But we think the Citroen strikes a better balance between fun and everyday comfort. The fact it is much cheaper and better equipped gives it the edge in this test.

1st- Citroen DS3 DSport The DS3 flagship has done what its less powerful stablemate failed to do in Issue 1,103 – beaten the MINI. It’s one of the best handling Citroens we’ve driven for years, and comes with a high-quality interior. Bold residual predictions make it an appealing prospect, too.

2nd- Mini Cooper S Still the class of the field in terms of outright handling. On a deserted back road you might find yourself wishing for the MINI, but it’s not as enticing as the DS3 as a daily driver, plus it’s more costly and not as well equipped.

3rd- Alfa Romeo MiTo Cloverleaf The return of Alfa’s Cloverleaf badge is long overdue, and the new flagship is distinctive and very likeable. Yet it’s no class leader. At nearly £18,000, the MiTo costs around £2,000 more than the hugely capable Citroen.