With all the new additions, it proves that there's plenty more life in the Seven yet 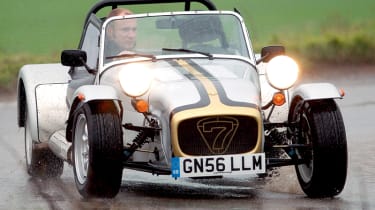 Accept its compromises, and the latest updates prove there's plenty of life left in the Seven. The new engine blends strong performance with mainstream reliability, while the revised chassis ensures fine handling comes as standard. This entry-level package will entertain novice and expert alike, and is a sure way to Seven heaven - especially if you build the Roadsport yourself.

Believe it or not, it's 50 years since the Lotus 7 first hit the road. Now in the hands of Caterham, the legendary two-seater has outlasted not just rival cars, but entire companies! However, with the demise of MG Rover in 2005, Caterham's supply of K Series engines dried up, meaning the tiny firm needed a rethink.

This overhauled entry-level model is the result. While the new Roadsport Sigma looks every bit the retro roadster, does it still serve up the driving thrills for which the brand is famous?

Beneath its traditional louvred aluminium bonnet lies the biggest change, which sees the old Rover unit replaced by Ford's 1.6-litre Sigma power­plant. It will be familiar to Focus drivers, but has been given a bespoke throttle body and variable valve timing here to increase overall output to 125bhp.

It's not only the engine that has been revised though, and further developments include a new chassis, which is 14 per cent stiffer and has more accurate suspension geometry than before. In theory, these modifications should make for even sharper handling.

But before you find out, there's the challenge of folding yourself into the spartan cabin. Inside, a big red starter button greets you, although you can still twist the key in the traditional manner to fire up the engine. Once you do, its fruity burble immediately banishes all thoughts of Ford's family hatchback.

On the move, the smooth motor offers strong performance from any point in the rev range, and the stubby gearlever makes changing ratios a real joy. The unassisted brakes also provide good stopping power with a progressive pedal action. To really appreciate the Roadsport, you have to point its long nose towards some twisty tarmac, where few cars at any price feel as involving.

The communicative steering and low-slung driving position ensure you get a genuine feel for the road surface, and if you pitch it into a corner, the willing engine allows the car to be balanced delicately on the throttle. Even the ride isn't bad, with only really big bumps causing the short travel suspension any problems. Best of all, though, is the price, because the Road­sport costs the same £18,495 as the outgoing model - or £15,995 if you fancy building it yourself from a kit.

However, it's not all perfect. The fiddly canvas hood and cramped cabin are constant reminders of the Seven's Fifties heritage. And with that tent-like roof erected, heat soak from the engine can turn the cockpit into a sauna. Negotiating city streets can be a challenge, too, as the tight shoulder harnesses restrict movement, and the long nose can make some junctions a journey into the unknown. Also, tall drivers might struggle to get comfortable next to the large transmission tunnel.

However, these are relatively minor niggles in a vehicle that's not designed as a daily commuter. Used as intended, the Seven entertains like few others.