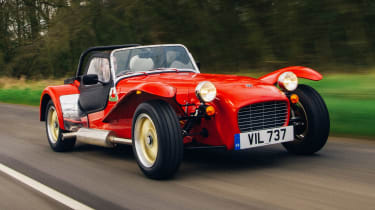 Regular Caterham Sevens offer better value for money than the Super Seven 1600, especially if you get carried away with adding options. However, the classic looks that the Super Seven offers as standard will be more than enough for some buyers. There’s a vintage feel to the driving experience, too, but in all the right ways, and it’s easier to live with than some of Caterham’s other models.

Performance cars have never been faster, more capable or more usable than they are today. But the rising interest in older vehicles suggests that for some drivers, the look, feel, sounds and smells of a classic sports car just can’t be beaten.

If you don’t fancy the risk of a genuine classic, though, there is another option. The Caterham Seven shows that you can combine modern performance and old-school values in one neat package – and this latest Super Seven 1600 leans even further towards the car’s historic roots.

We’ve been here before with the 2016 Seven Sprint and 2018 Seven SuperSprint, but unlike those two models, with their tiny turbocharged Suzuki engines, the latest retro Seven packs a 1.6-litre four-cylinder unit from Ford. It’s the engine from the entry-level Seven 270, and it makes 135bhp and 165Nm of torque. 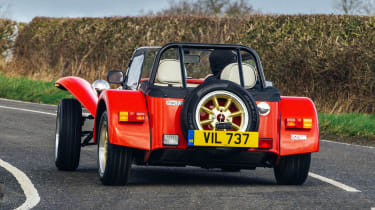 It’s equipped with a pair of Jenvey throttle bodies that look just like old carburettors – giving modern performance with a classic touch. Polished K&N air filters poke through a cutout in the side of the aluminium clamshell bonnet, but they’re far from the only retro touch. The Seven’s normal cycle-style front wings have made way for large mudguards, the grille is missing the usual ‘7’ motif, and buyers get a set of 14-inch, gold-coloured Minilite-style wheels wrapped in skinny Avon tyres.

There’s a classic look to the interior, too. Clambering in is tricky if you’re tall, particularly with the larger wooden-rimmed Moto-Lita wheel, but the traditional seats are comfortable, and the inertia reel belts a breeze to used when compared with Caterham’s usual four-point harnesses.

Our test car’s white leather trim contrasts with the bright red exterior paintwork, and a set of suitably retro Smiths instruments give you all the vital information. Pedal spacing is tight (you’ll need slim shoes!), but the view over the bonnet, wings and headlights is among the best in motoring.

The engine chunters reluctantly to life, although Caterhams tend to be happiest when all the fluids have warmed up. This gives you enough time to get acquainted with the car at low speeds, from the surprisingly light steering to the snorting induction noise from those air filters. 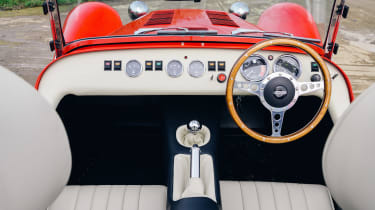 Pick up the pace, and all those Seven sensations come flooding back. The ride quality is surprisingly fluid on the tall-sidewalled tyres and road-biased suspension, and while the steering does begin to weight up in corners, the larger wheel still transmits detailed messages about the road surface below.

With manageable power and just 185-section rubber at the rear axle, the 1600 squirms around wonderfully in corners. It lets you steer the car almost as much with the throttle as the wheel – although with modest torque and no limited-slip differential at the rear, the Super Seven isn’t a car for lurid slides.

The engine and gearbox are sharp, raw and engaging to use, even if this Seven lacks the screaming top end found in other Caterhams. Given the firm shove you need to slow the car down, that’s fine by us – but in all other respects, the way the Super Seven steers, corners and goes makes most modern sports cars feel like you’re driving in oven gloves and hobnail boots.

It’s not perfect, of course. Caterhams aren’t practical cars, dealing with the roof will leave your knuckles redder than regular 20-second hand washes, and motorway driving can be pretty miserable. It’s not a cheap car, either – ours was £39,565 including options. But if you have the means, few cars are as rewarding to drive on a country road.