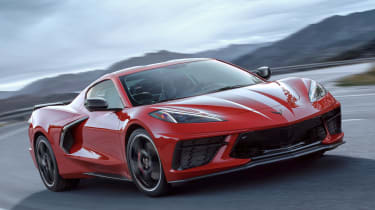 The new Corvette has switched from a front to mid-engine layout, and in the process makes itself a more credible supercar challenger. Chevrolet’s familiar V8 remains, but has been tweaked to produce more power – and while there’s no manual gearbox, the C8 offers bags of character, a comfortable ride and limpet-like grip. If Chevy can get the price right in the UK, it could shake up the supercar market in a way we’ve never seen before.

There have been rumors of a mid-engined Corvette for over 50 years. But now the mystery is over: it’s finally here, and we’ve been lucky enough to take one for a drive.

In many ways, the latest Corvette represents a complete departure from its predecessor, but despite the short nose and elongated mid-section that results in having an engine in the middle of the car, it still looks a lot like a Corvette. It’s all fighter plane and pointy bits; attitude and angles.

The eighth-generation car is very much like every Corvette ever built, in fact, albeit one with its V8 bolted behind the occupants instead of in front. The engine churns with the same sort of power as its predecessor, despite the fact it redlines at a lowly 6,500 rpm.

Having built such engines since the fifties, Chevrolet has learned a few tricks over the years. The C8 churns out 495bhp and 637Nm of torque when equipped with the optional Performance exhaust; cheap out and you’ll have to settle for ‘just’ 490bhp and 630Nm of torque; every car gets a dry sump that ensures the engine sits as low as possible. 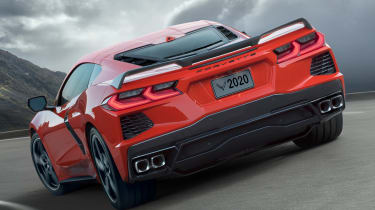 Americans seem surprised that this supercar isn’t available with a manual transmission; an eight-speed dual-clutch automatic is the only gearbox available. It’s a quick-shifting box, however, and one that’s been blessed with a clever and easy-to-use launch-control system that’ll clip off 0-60mph in less than three seconds. Chevy tells us that there won’t be a manual because they’d have to cut a hole in the structural box that runs through the C8 like the backbone of a Lotus Esprit.

It’s rumored that the backbone will hold the batteries for a performance hybrid version later down the line, but for now it’s strictly structural and contributes to the new car’s 19 per cent improvement in torsional rigidity. This set-up makes for a slightly cramped interior, intruding on available cabin space for the driver and passenger.

The Corvette is a big car. It’s wide and long like the best American cars of the past – but you wouldn’t know it from sitting inside. A big sweeping center console that sprouts from the instrument panel and sweeps toward the driver adds to the closed-off feeling. A digital cluster can be switched to display different gauge designs.

The lack of vision out the back reminds us of old supercars like the Lamborghini Countach or Ferrari Testarossa. To fix that problem, Chevy mounts a camera to the roof and plays the video through the rear-view mirror – just like Range Rover does in the latest Evoque. Chevrolet also had the wisdom to offer three different seat designs that will tailor to everyone from fast-food diners to wannabe race car drivers.

Tight cabin aside, the C8 is surprisingly refined. Equipped with the magnetorheological dampers, the ride is plush without being sloppy. Think, poor man’s McLaren 720S and you won’t be far off. 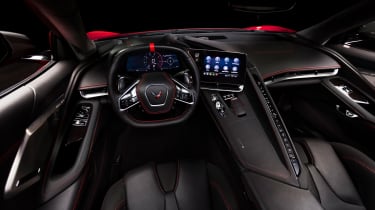 Opting for the Performance exhaust doesn’t result in a booming or juvenile car, either. The old Corvette was louder and more uncouth; from the inside, the C8 seems quieter and the engine throbbing sounds you hear are those of the intake played for the driver, not a blaring exhaust tuned to set off car alarms.

Getting a grip on the squared-off steering wheel takes some time, but once you find where to hold the thing you get fluid and immediate movements of the nose. Turn-in is crisp, heroic, and deeply satisfying. The quick steering and the grip of the front end shrink the big Corvette around you.

Cornering grip from the Michelin Pilot Sport 4S rubber seems inexhaustible on the road. But unlike in a Porsche 911, the dual-clutch automatic never really wakes up when you’re pushing hard. The Chevy has paddles mounted to the steering wheel for the driver to take control, but left to shift for itself, the auto box doesn’t appear interested in the fight.

Start to challenge the C8 and it won’t fight back. The Z51 model version we drove came with those sticky Michelin tyres, larger brakes, a limited-slip differential, and an aero body kit that is said to improve high-speed stability. In the US at least, base versions will come on all-season tyres, which could dramatically change the way this new Corvette drives.

Perhaps the biggest surprise about the new Corvette is that even though it looks like it should be able to fly and quash villainous plans, it’s graced with a percentage of civility. There are now two boots and the rear one will hold golf bags – a must-have for the Corvette demographic in its home market.

Yet the new Corvette’s biggest surprise is the price. A new Corvette will start at $59,995, or around £50,000 at current exchange rates. We can expect a sizeable premium if or when the C8 arrives in the UK, but it’s likely even a well-equipped example will trade for less than £80,000. The fact you’ll soon be able to buy a mid-engine supercar for the price of a nicely kitted-out BMW X5 strikes us rather good value indeed.