We drive the new Chrysler 300C on British roads. So should the 5 Series be worried? 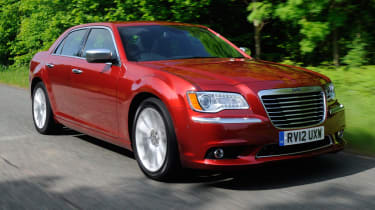 For buyers who demand something a bit different, the 300C is a compelling choice. Bold new looks and a luxury interior combine with hushed refinement and a strong engine to form an impressive package. However, it struggles to match the taut dynamics and low emissions of class leaders. Throw in the price rise over its predecessor, and the Chrysler has limited appeal.

Is this the start of an American revolution? Chrysler certainly thinks so – because after a two-year absence, its executive class heavyweight is back.
The brand’s partnership with Fiat meant that when we first drove this car at the end of last year, it was badged a Lancia Thema. It still impressed with its refinement and improved quality – but how would the 300C measure up on demanding British roads?
Its sleek new design certainly evokes Detroit more than it does Turin, and the new car shares the broad-shouldered silhouette of the imposing original. Yet the large grille is slimmer and the neat new LED lights, plus revised Chrysler badges, all give the latest 300C a much cleaner look; it seems more svelte even though it’s longer and wider than before.

The brash styling was a big part of the old car’s appeal, and the 300C still boasts plenty of US-style garnish. The flagship Executive that’s set to be the best seller gets huge 20-inch wheels and chrome mirrors as standard. If you want to stand out, you’ll certainly do it in this Chrysler.
In fact, the top-spec 300C is so well equipped that there are only two options: a premium stereo and metallic paint. That means luxuries such as touchscreen sat-nav, adaptive cruise control and heated leather seats are all included in the £39,995 price. The previous range-topper was around £35,000, so the new car is much more expensive. In fact, the line-up starts at £35,995.
The upmarket cabin goes some way to justifying the premium price. Its thick-rimmed steering wheel and rounded dash are trimmed in soft leather and the striking blue dials look great, yet the cheap wood trim and open-gate box ensure the car trails European rivals for build quality.
There’s only one engine on offer, but the 3.0-litre V6 diesel provides effortless performance. With a muscular 540Nm on tap and a softly sprung ride, the 300C makes a fantastic motorway cruiser. Show it a winding country road, though, and it’s not as rewarding as the equivalent BMW 5 Series, with a sluggish gearbox and loose body control.
The weighty steering gives decent feedback, but the big wheels hunt out road cambers and despite its complicated multi-link suspension the 300C never feels planted enough to inspire real confidence through corners. While this lack of finesse won’t matter to most buyers, the 300C’s average economy and high 191g/km CO2 emissions will.
Another issue is space: although there’s lots of room in the rear, headroom is quite tight, and the narrow 481-litre boot is below class average.
The latest 300C is a charismatic addition, but as Chrysler won’t offer an estate or smaller diesel, it’s likely to remain a rare sight.
Share this on TwitterShare this on FacebookEmail