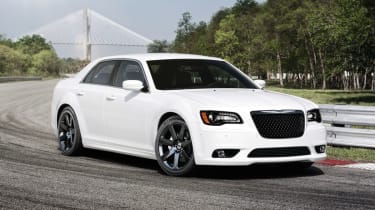 It’s more muscle car than tech-laden sports saloon, but the Chrysler 300C SRT8 is still hugely talented, engaging and has bags of charm. Strong quality, plenty of kit and acres of space add to its all-round appeal, while performance figures are only just shy of the BMW M5 and Merc E63 AMG. However, the price is a long way short of its German rivals, which makes it a performance bargain.

Advertisement - Article continues below
Chrysler’s a company that’s proud of its heritage. Sitting in the Walter P Chrysler museum in Detroit is a beautiful 1955 Chrysler 300 – the first model to wear the 300 badge. Luckily for us, sitting in the car park outside is the 470bhp Chrysler 300C SRT8 – and Auto Express has been given an exclusive drive.
The standard 300C is striking enough, but the SRT8 sits lower on seven-spoke 20-inch alloys, has subtle spoilers at the front and back, slim side skirts, a blacked-out grille and menacing LED daytime running lights to make it look stockier. It's a real head turner.
Inside, a combination of red leather seats, carbon fibre inserts across the dash and centre console, and a flat-bottomed steering wheel up the excitement further. The 8.4-inch touchscreen display features an excellent Garmin sat-nav system and iPod integration, which plays through a cracking 19-speaker Harman Kardon stereo. In US speak, this car is fully loaded.
Advertisement - Article continues below
Advertisement
Advertisement - Article continues below

So much so that the touchscreen even features graphics that measure the G-Force you’re subjected to, as well as timing 0-60mph runs and measuring braking.
On a Sunday, the roads near Chrysler’s HQ are quiet, so we lined the car up on the slip road that headed to Interstate 75 and floored the throttle.
Chrysler doesn’t like quoting 0-60mph times these days, other than saying ‘in the high four second range’. According to the on-board timer, we managed it in five seconds dead, although on a better road surface we reckon 4.8 seconds would be achievable. That’s real shove-you-back-in-your-seat stuff, accompanied by a fabulous V8 roar from the 6.4-litre HEMI V8.
With the traction control on there’s a fair bit of wheelspin, even as the car changes up to second gear, while the power keeps on coming past 60mph. Turn the traction control off, and the car becomes seriously tail happy, but seriously fun. The steering reacts quickly enough for you to catch slides and drift the car on the throttle, while a bit of correction is still needed when the traction control’s on.
Advertisement - Article continues below
However, this is a big, heavy car that doesn’t have the agility or sophistication of a BMW M5 or Mercedes E63 AMG. It’s no less fun, though, and does everyday life well in spite of its sporty orientation – the ride is mostly comfortable and the car is quiet when you’re cruising. We hope the slightly ponderous five-speed auto gets replaced by an eight-speed ’box sooner rather than later, though.
We weren’t able to test economy, but the car will cruise on just four-cylinders to save fuel, and we’d guess a UK average in the low 20s should be possible.
Chrysler is hopeful that the 300C SRT8 will make it to the UK in limited numbers, at which point its trump card will be played – price. Where the M5 and E63 are nearing £75,000, the SRT8 is likely to be the best part of £20,000 less – more in keeping with an M3 or C63 AMG.
The Chrysler is bigger than the lot of them, with bags of space inside and a decent boot. The quality is hugely impressive, too – testament to the improvements Fiat has made to Chrysler since taking over the then-ailing US car maker in 2009.
Advertisement
Share this on TwitterShare this on FacebookEmail
Advertisement