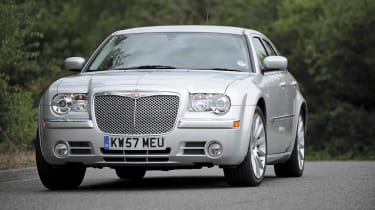 Some American imports are more successful than others, but just like Krispy Kreme doughnuts, the Chrysler 300C has hit the spot with British customers. Demand for the retro-look car has been so strong, its residual values rival those of prestige German counterparts.

But what’s it like to live with on a daily basis? To find out, Auto Express has welcomed a Touring version on to our long-term fleet – and my love of all things transatlantic made me the ideal candidate to grab the keys! The big Chrysler couldn’t be more different to my previous machine, a Honda Civic Type R hot hatch. For a start, its looks are retro rather than space age, and at more than five metres long, it’s much bigger. Also, while the Civic had ultra-firm suspension, my new steed is softer than a freshly baked doughnut. It has a lazy 3.0-litre diesel engine rather than a revvy petrol unit, and its auto gearbox is tuned for comfort as opposed to speed.

Despite the differences, I’m pretty taken with the 300C. Few cars at any price can match our long-termer for road presence, and SRT-Design trim incorporates a set of tasty 20-inch alloys. The high bonnet dwarfs run-of-the-mill executive cars, while I prefer the extended roofline over that of the Touring’s saloon stablemate, as it gives the big American car a more distinctive look. However, my expectations of a practical family model were quickly dented, because the 300C has surprisingly little interior space for such a big vehicle. It’s not cramped, but the rear seats are no better than those in the Civic and the boot doesn’t look as big or swallow as much as its 630-litre capacity suggests.

The Chrysler does have a lot of kit, though, including part-leather trim, cruise control and an all-singing, all-dancing touchscreen sat-nav/stereo. Plus there’s a built-in hard drive and USB port, so I’ve started to load the system with music to banish CDs from the door pockets for good. However, while a recent refresh has improved the interior, the 300C still doesn’t provide the cabin quality we take for granted in bona fide executive models. The plastics are a notch or two lower than those of the Chrysler’s German rivals, and build quality is hit and miss – summed up by the misaligned trim on the steering wheel that stares you in the face every time you get into the car.

The 300C’s dynamics are typically American, too; fine in a straight line but wayward in bends. It is the polar opposite to my Type R, with plenty of body roll as the suspension struggles to keep the 1,945kg estate upright. Mind you, I think I could be grateful for that. You see, the soft ride and automatic box do little to encourage enthusiastic driving, and I’ve already noted the 3.0-litre CRD’s thirst for diesel.

After the fuel hungry Honda, I’d hoped for a more wallet-friendly car, but a 28.6mpg average and sky-high diesel prices mean I’m unlikely to be any better off!

And while that’s bad news for my finances it’s good for my waistline – as it will discourage me from taking too many trips to my nearest Krispy Kreme drive-thru!