We've driven the all-new Chrysler 300C, which promises Audi A8 levels of space and luxury for a fraction of the price 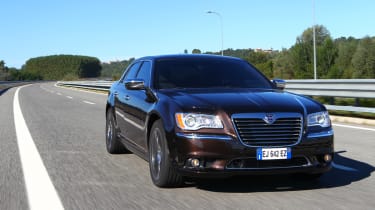 There's no doubt that the latest incarnation of the 300C marks a huge improvement in both in terms of interior quality and refinement, and it excels as a long distance cruiser. It's less accomplished when the road starts to bend but, by the time it reaches the UK it should offer keen value for money and the sharpened looks give it plenty of appeal. However we'd recommend waiting for the eight-speed gearbox to arrive before taking the plunge.

It might be wearing a Lancia badge but this is the all new Chrysler 300C. It's set to arrive in the UK next spring with just this V6 diesel engine at first, in two different states of tune.
The first-generation 300C became infamous for its menacing, Mafioso-style looks, so the American firm has aimed to be a little more understated with the latest version. There's still plenty of visual flourishes though, like the optional 20-inch alloy wheels and curved chrome 'U' that joins together the rear taillights.
The styling is more subdued  but the overall shape, with its high shoulder line and short overhangs, is still imposing enough. The addition of a slimmer grille, LED headlights and subtle changes at the rear help give the refreshed 300C greater mass appeal.

Underneath, there’s a new eight-speed ZF automatic gearbox for petrol versions – the same unit that appears on the latest Range Rover – but the archaic five-speed auto ‘box continues in the diesel version until later next year. It's smooth enough at shifting the cogs, but can feel clumsy and dim-witted when you demand too much of it. The manual mode is counter-intuitive, with shifts performed by nudging the stick side-to-side rather than forward and back.
The 3.0-litre Multijet diesel has been carried over, offered in either 187bhp or 236bhp guises, and 440Nm or 550Nm of torque respectively. We tried the more powerful version, which is impressively smooth and refined, providing enough mid-range punch to make overtaking hassle free.
Both diesel versions have exactly the same economy and emissions figures, returning 39.8mpg and emitting 185g/km of CO2 (or 191g/km if you opt for the bigger wheels) – not bad for a two-tonne car, but unlike most of its rivals it does without stop-start technology, which would significantly reduce that figure.
On twistier roads, the 300C's size and weight makes itself known, especially when you start putting bigger inputs through the steering and throttle. Despite a fairly sophisticated suspension setup, which has been tailored to European roads, it naturally tends towards understeer. The steering, while fairly hefty, doesn't communicate much information back to the driver, with a fair amount of dead play around the straight ahead.
The ride quality is also dependent on the road surface. On smooth roads it's well judged, soaking up undulations and bumps with ease, but uneven or broken surfaces can make it feel quite jittery - not something you expect on an executive car with such a long wheelbase.
The other major change is on the inside, which makes the 300C feel like a proper luxury car. The jewel-like, deeply cowled dials, are backlit with soft blue lighting and the thick-rimmed, leather covered steering wheel and 8.4-inch colour touch screen - which controls everything from the heated seats to the electric sunblind - means the centre console remains simple and uncluttered.
There’s still an enormous amount of room inside. The big Chrysler is over five metres long – that’s Mercedes S-Class territory – so rear passengers are treated to a palatial amount of legroom, but anyone over six foot might find headroom a little tight. The 462-litre boot has an oddly shaped loading bay, and is smaller than both the BMW 5 Series and Audi A6.
Share this on TwitterShare this on FacebookEmail