Distinctive US contender is more refined and sophisticated 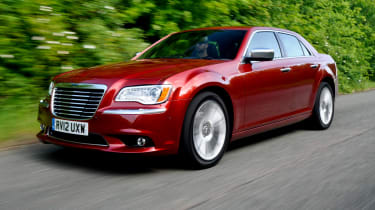 After some lean years, Chrysler has returned to the UK with renewed confidence. Crowning its refreshed line-up is the new 300C, which promises the same blend of comfort and luxury as the old car, but with improved quality and refinement.

According to Chrysler, three-quarters of those who bought the old car were drawn in by its eye-catching styling – and they won’t be disappointed with the revamped design.The broad-shouldered silhouette remains, but the ostentatious grille has been toned down: it now features an attractive seven-bar design that mirrors the shape of the new winged Chrysler badge. Integrated LED lights front and rear are just as striking as their Jaguar counterparts, but the chrome accents on the mirrors, door handles and boot lip give the 300C’s styling an authentic American flavour. Bulging arches and 20-inch wheels ensure it’s just as imposing as before.

However, if the exterior seems familiar, the cabin is a revelation. It’s been lavished with attention, and for the most part, the effort has paid off. The sapphire-blue dials and huge 8.4-inch infotainment display look great, plus there’s lots of wood and leather on show.

Yet some of the materials still feel a little flimsy compared with the well finished XF – let alone even higher-quality German rivals. Niggles such as the tacky analogue clock and a foot-operated parking brake that blocks the footrest spoil the overall effect.

Chrysler predicts the top-spec Executive model will make up the vast majority of sales, and it has everything you could need. A panoramic sunroof, radar-guided cruise control and cup-holders that can be heated and cooled are highlights. Jaguar owners will have to dig deep to match the 300C’s spec.

Despite its intimidating proportions, the 300C isn’t as practical as you might expect. Although it’s longer, wider and taller than the XF, this size advantage doesn’t mean you get a more spacious interior. There’s plenty of legroom behind the driver, but taller passengers will find their heads brushing the roof in the back. Also, the 481-litre boot is oddly shaped, narrowing at the back where the wheelarches eat into the available luggage space.

Still, this won’t matter if the Chrysler can outshine the Jaguar on the road. Perhaps it’s ironic that a car named after a famous petrol V8 engine is now only offered – in the UK at least – with diesel power, yet there’s definitely nothing wrong with the 540Nm of torque provided by the new 3.0-litre V6. Pick-up is brisk, even at low revs, but the Chrysler only has a single turbo against the Jaguar’s two. As a result, it feels less eager in-gear.

During our track tests, the 300C took nearly a second longer than the XF to cover 0-60mph (a total of 7.6 seconds) and trailed by the same margin for the in-gear times as well. While the Jaguar is lighter and has 35bhp more power, part of the blame also lies with the Chrysler’s five-speed auto box. Its gearing is long enough to keep the 300C refined at high speed, but it doesn’t respond fast enough to throttle inputs and feels dim-witted compared to the XF’s.

This lack of sophistication continues on more demanding roads. Chrysler has overhauled the 300C’s suspension to suit European tastes, but despite different springs and dampers, plus thicker anti-roll bars, it still pitches and rolls more through corners than the Jag. The ride also lacks the supple fluency demonstrated by the XF. Bigger potholes send judders through the cabin and the huge alloy wheels tend to seek out cambers in the road.

Fiat’s Multijet engine technology has cut CO2 emissions, but the 300C’s 191g/km figure will put off many fleet buyers – as will poor test economy of 21.9mpg. Predicted residuals of just 31.7 per cent (compared to over 50 for the Jaguar) also make it expensive to own.

So the new 300C is true to the spirit of the old car: a charming but flawed alternative to the mainstream. Will it be able to hold off the XF to take victory on its road test debut?