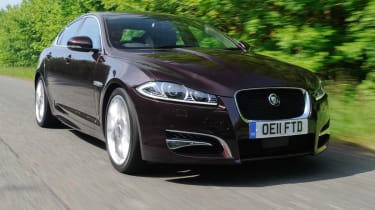 Last year, the Jaguar XF was voted your Driver Power Car of the Decade. However, the facelifted 2.2-litre version has since suffered a road test defeat at the hands of the BMW 520d and Audi A6. Yet because Chrysler has upped its prices, the flagship 300C is now right in the firing line of a very different XF – the storming Diesel S.

Equipped with a twin-turbo 3.0-litre V6 that churns out 271bhp and 600Nm of torque, the Jaguar comfortably outmuscles the 300C on paper and should prove a stern opponent.

Few executive saloons can match the XF’s desirability and this version is dripping with visual appeal thanks to a sleek aerodynamic bodykit and optional 20-inch alloys. The revised front end, with its slender headlights and upright grille, provides an understated sense of class that trumps the brash 300C.

Inside, the Jag shows its age in some areas: the small central dials and unresponsive touchscreen, for example. But overall, the gloss black and metal trim looks and feels modern. Theatrical touches like the rising gear selector and scrolling air vents haven’t lost the power to raise a smile, either.

Despite featuring sports seats, sat-nav and a 400-watt sound system, the entry- level Luxury model we tested doesn’t come close to matching the Chrysler for kit. Plus, if you add up all the options, the Jaguar’s price quickly shoots up by an alarming £7,550. Still, the XF feels like a true premium product, and experts predict it’ll retain 51 per cent of its value after three years, compared to the 300C’s 31.7 per cent.

Surprisingly, the sleeker of the two cars also has the edge for practicality, with a 500-litre boot that grows to a decent 923 litres with the seats folded, although the 60/40 split/fold set-up is a £60 option. It feels cosier inside, as its wheelbase is 143mm shorter than the Chrysler’s, but we found there was more rear headroom in the Jaguar.

However, it’s only when you hit the road that the XF starts to pull out a clear advantage. With eight gears rather than five, active engine mounts to reduce vibration and laminated side glass, it’s even more refined than the Chrysler on the motorway. Tackle more challenging roads and the gap between the two widens: the XF feels more responsive and planted, giving you the confidence needed to use all of its extra performance.

At the track, it was nearly a second quicker from 0-60mph, taking 6.7 seconds, and proved just as rapid in-gear, blitzing past the Chrysler. Left in D, both cars can be hesitant to kick down, pausing to select the right gear before pressing on, but the XF never jerks or changes mid-corner like the 300C does.

It can’t match ultra-efficient German rivals, but the Jaguar is a polished and desirable package that oozes class. Even the slightly steep price is unlikely to cost it victory here.

Chart position: 1Why? Last year’s facelift ensures XF is still one of the most desirable saloons on sale. This Diesel S version has the performance to match its athletic styling.