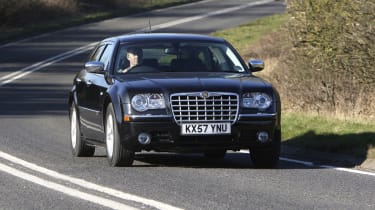 It’s hard not to like the 300C. Chrysler has done well not to tweak the lines too much – it retains the same visual impact as before and remains one of the most distinctive cars on the road. Inside is where the main changes have occurred. The darker trim gives it a more sophisticated look, the load bay is versatile and the 300C comfortable and composed on the road. But the real weapon in its armoury is its fantastic value for money.

Executive cars aren’t renowned for being particularly distinctive in the looks department, so Chrysler’s 300C has always stood out.

With punchy powerplants, an estate variant and tempting prices adding to its appeal, it’s no surprise it has been a huge success for the firm, with more than 6,000 sold in the UK.

Now Chrysler is hoping that mid-life improvements to the saloon and Touring models will make it even more tempting for buyers. Not that you’d notice from the outside – the changes here are limited to revised rear light clusters, while the four-door gets a new boot spoiler.

These subtle updates are no bad thing, though, as the 300C is one of the most unmistakable cars on the road, with real presence. For buyers looking for something different, the Chrysler still fits the bill perfectly.

Inside is where the biggest changes have taken place. Gone is the light grey upholstery of the old car, replaced by a more sophisticated black finish. The instrument panel and centre console have also been redesigned, while a soft-touch finish to the armrests and door panels adds to the improved quality. It’s still not quite a match for its German rivals, but a definite step forward in the right direction.

Safety has been improved with the addition of seat-mounted airbags in the front and side curtain airbags in the back. There’s also a new option in the form of the excellent MyGIG touchscreen sat-nav and 20GB music hard drive system, which includes a Bluetooth phone connection.

Under the skin, the chassis remains unchanged, while the engine is still the same 3.0-litre V6 diesel sourced from Mercedes. And with 510Nm of torque, it’s a smooth and potent unit, while the slick and quick-shifting five-speed automatic gearbox makes the most of the V6’s power.

The only criticism is a lack of sound insulation, which means the oil-burner can be a little noisy at high revs. That doesn’t detract from the sense of comfort, though. Ride quality is excellent, and the big Chrysler is superb on the motorway. However, it’s less impressive on back roads. The steering is positive, but there’s little feedback, and the suspension struggles over rough surfaces. Body control could be better, too.

As a load-lugger, the 300C is pretty good. With the rear seats in place, it offers 630 litres of storage space – drop them, and this increases to a useful 1,602 litres. Although this isn’t as large as the Mercedes E-Class Estate, there are some neat touches. Accessing the boot is easy, thanks to the L-shaped tailgate which cuts into the roofline, while there is also a useful underfloor stowage tray. But the biggest appeal of the 300C, aside from the great looks, is the price. The new model starts at £27,495 for the saloon and £28,495 for the Touring, which means it’s a lot of car for the money. Equipment is superb, too, and even the entry-level version has an unrivalled list of standard kit, including leather seats, self-levelling suspension, metallic paint and rear parking sensors.

For buyers wanting even more visual impact, there is a new SRT-Design model. It takes styling cues from the high-performance SRT-8, and comes in both four and five-door variants. Costing an extra £5,000, it uses the same CRD engine, but gets 20-inch alloys, a chrome mesh grille and wide wheelarches, giving it a real muscle car look. Inside, the changes include SRT-8 leather seats and steering wheel and carbon fibre detailing, while the MyGIG system is standard. It adds an extra dash of flair to an impressive package.

Rival: Audi A6 2.7 TDI AVANT While the A6 has the advantage on interior quality, it lacks the muscular styling of the 300C – if you want to stand out, the A6 isn’t the car to do it in. It also can’t match the Chrysler’s competitive pricing or long list of standard kit. However, the Avant is better to drive and the boot is bigger with the seats folded.