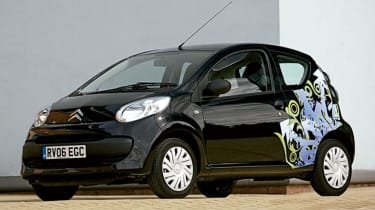 The Airplay cleverly exploits the standard C1 stereo’s auxiliary socket with a good-looking iPod kit. It works well and sounds good, while other extras add to the special edition’s appeal. There’s no doubt Citroen is expert at drawing in younger buyers, but C1 owners should look at buying an iPod with accessories separately – it will be a cheaper way to digital music on the move.

Here’s a new Citroen that’s sure to be music to the ears of technology fans. The C1 Airplay comes with a free Apple iPod Nano digital music player and sturdy holder.

The tiny device has a one-gigabyte memory, holds around 240 songs and usually costs £99 if it’s bought direct from Apple. Once fitted into the C1 Airplay, it plays its music through the car’s speakers, thanks to a fuss-free stereo system that’s easy to use.

And there’s more to the Airplay than the free iPod. Based on the entry-level Vibe, the special edition costs £7,295, a full £500 extra, but adds electric windows, remote locking and ‘hi-gloss’ chrome interior trim inserts to the list of standard equipment.

Buyers only have the choice of two body colours – red as standard, or the optional metallic black here. Thankfully, you don’t have to suffer the garish body decals fitted to our test car. They are an option, with prices starting from £70. We wouldn’t recommend them, though – they were already beginning to peel off our C1... as were some of the stick-on inserts on the dash!

And while the iPod holder recharges the portable device automatically, the wire connecting it to the socket on the front of the stereo looks messy – and there’s no glovebox to hide the player in when you park. That means you will have to take the iPod with you whenever you leave the car, unless you want to run the risk of it being stolen.

However, the C1 is generally well put together and is a good choice for city driving. Sharing many of its parts, and even a production line, with the Peugeot 107 and Toyota Aygo, it is a masterpiece of cost-saving design, and is surprisingly practical for such a small car.

The high driver’s seat is firm yet comfortable, while space in the back of our three-door model is acceptable. A five-door version is available for an extra £350. Mechanically, the Airplay is identical to the standard C1, with the same throaty-sounding three-cylinder engine, slick five-speed gearbox and reassuring ABS brakes. Safety equipment includes both driver and front passenger airbags.

The ride is sporty and the C1 is fun to drive on twisty roads, thanks to steering that is accurate, if lacking feel.

Group one insurance and 61.4mpg economy is also good news for younger drivers – as is Citroen’s current cashback offer of up to £800 off the list price. On the downside, though, air-con is unavailable even as an option; Citroen believes that uptake would be low because of the extra cost.