We've already tried the new Citroen C3 in petrol form, but how does the top-spec diesel handle UK roads? 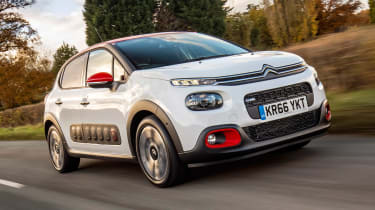 Citroen’s new C3 embraces the distinctive style first embodied by the excellent C4 Cactus, but its talents are more than just skin deep. From the tech-laden cabin to the punchy engine range it excels, and while it lacks the space and overall composure on the road of some rivals, it’s reasonable fun to drive. Having said all that, we’d still steer clear of this top-spec diesel. It’s a good unit, but the petrol alternatives are cheaper and sweeter to drive, while the C3’s core value-for-money appeal is better emphasised at a lower price point.

Citroen has a reputable history of building successful small cars – from the 2CV to the AX and the Saxo – but the C3 supermini nameplate has never really built upon that legacy. The first two generations were acceptable but wholly underwhelming superminis, lacking any stand-out reasons to choose one over the established class big-hitters.

To make things worse, the more adventurously designed DS3 arrived in 2010, demonstrating that the manufacturer’s small car mojo was not irretrievably lost.  In light of the DS3’s strong showing, Citroen knew the third-generation C3 needed a fresh, memorable identity. When this new C3 model first launched at the Paris Motor Show, its distinctive looks and funky cabin gave us real hope that Citroen had pulled that off, while our first impressions of driving the car abroad were largely positive. This is the real acid test, though – how does the Gallic small car handle tough British roads?

There’s no question that the new C3’s shapely exterior and bright colours lighten up even the most bleak English winter’s day. Citroen has taken plenty of inspiration from the popular C4 Cactus crossover – from the rugged lower body cladding to the now optional ‘Airbumps’ – and as a result, the C3 can match the personality as its bigger cousin. Citroen has gone bigger on customisation, too. As well as the option to ditch the Airbumps, there’s a total of 36 exterior roof/body colour combinations to let buyers express themselves.

Inside, there’s also a variety of dash accent hues available, but the overall design lacks some of the distinctive touches found in the C4 Cactus. Still, the minimalist dashboard, funky air vents and lounge-style seats give enough character to make this C3 feel like a big step onwards from the old car.

Quality is generally good, too, although we’re disappointed that almost all of the surfaces you touch are hard plastic. Practicality is only average, too - there's a sizeable 300-litre boot and legroom is decent enough, but rear headroom is tight for six-footers and the glovebox is, frankly, pathetic. To top it off, the cupholders are rather small, although at least you do actually get some unlike the DS3.

The seven-inch touchscreen might look familiar Peugeot/Citroen fare, yet this version is more responsive to the touch than the one found in older PSA models. All C3s with it fitted receive Apple CarPlay and Android Auto smartphone connectivity, though if you want sat-nav in the traditional sense you’ll have to pay an extra £500 even on top models. Amongst the neat feature of our Flair model, there's even a high-definition windscreen mounted camera than can record pictures or video and send them to your phone, replacing the need for an aftermarket 'dash cam'. 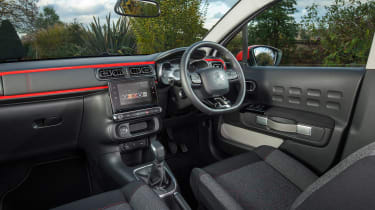 Citroen’s primary focus for the new C3 is on providing outstanding comfort rather than Ford Fiesta levels of cornering ability. That’s expressed well through the light and airy cabin and soft, comfortable seats, but the suspension isn’t quite the revelation promised. For the most part it’s very smooth, cushioning occupants from the road surface deftly around town and offering a laid-back feel. However, that composure can start to unravel on some of the badly rutted tarmac all-too-often found in the UK, with the C3 starting to bounce and thud as the damping struggles to keep control.

That’s a shame, as refinement levels are very good all-round. As expected, there’s plenty of body roll in the bends, but the C3 is still enough fun to drive thanks to decent grip levels and reasonably direct steering.

Having sampled the excellent 1.2-litre Puretech petrol engine previously, we tried the range-topping 1.6-litre diesel engine here. It’s not expected to be the dominant variant in the sales charts, but it’s still a likeable powertrain. With 254Nm of torque to shift the C3’s modest kerbweight, it feels gutsy from low revs and, kept in the mid-range, it’s just as sprightly as the petrols. It does become raucous above 3,000rpm, however, and as on all C3s the springy, long-throw gearshift detracts from the overall experience. As expected the diesel is impressively efficient, though, promising 76.3mpg and emitting just 95g/km of CO2.

You do pay a premium for this oil-burner, as it’s nearly £1,100 more than the most powerful Puretech 110 petrol. In the flagship Flair trim we have here, that puts it right at the top-end of the supermini market at £17,000 and the C3 lacks the ultimate polish to compete there.