The Citroen Dispatch is cheap to run, but ESC or a full-height bulkhead doesn't come as standard 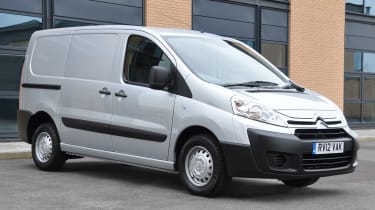 The Citroen Dispatch is the result of a joint venture between PSA Peugeot Citroen and Fiat. It launched in 2007 alongside the Peugeot Expert and Fiat Scudo, although in 2012 Toyota took the place of Fiat in the project and introduced the Toyota Proace.

The Dispatch comes in L1 short-wheelbase and L2 long-wheelbase guises, while a high-roof version of the long-wheelbase model – badged L2H2 – is also offered. There are standard and higher-spec Enterprise versions of the regular panel van, plus the Dispatch L1 and L2 are available as crew vans, with a second row of seats to transport your workforce. Users needing even more passenger carrying capacity have the option of six-seater Combi and nine-seater Combi SX models, too, while those requiring extra versatility can buy a platform van and choose from a range of load options.

Among the extras Citroen offers is the Grip Control electronic traction control system, while rear air suspension enables drivers to reduce the height of the van’s back end for easier loading. Early versions of the Dispatch were offered with petrol power, but the range is now exclusively diesel: it comprises 90bhp 1.6 and 125bhp 2.0-litre HDi engines, co-developed by PSA and Ford.

No matter which engine you go for, the Citroen Dispatch offers impressive fuel consumption for this class. The 90bhp 1.6-litre – only available in low-roof versions of the Dispatch – promises 42.2mpg fuel economy and CO2 emissions of 177g/km.

Surprisingly, the 125bhp 2.0-litre is the more efficient choice, returning 44.1mpg fuel consumption and emitting 168g/km of CO2 in H1 models. This suggests the 1.6-litre engine is slightly underpowered. Even so, the Dispatch offers similar economy to the Volkswagen Transporter BlueMotion (which claims 44.8mpg) and is more efficient than the Vauxhall Vivaro ecoFLEX (42.7mpg with speed limiter).

Service intervals for the Citroen are long – a check-up is needed every 20,000 miles or 12 months – although rivals like the Vauxhall Vivaro (25,000 miles/12 months) and Ford Transit Custom (30,000 miles/24 months) have the edge here. Still, insurance costs should be competitive, with the Dispatch ranging from insurance group 3E to 4E – that’s lower than the Mercedes Vito, as well as the virtually identical Peugeot Expert and Toyota Proace.

Load volume specs in the Dispatch van range are among the easiest to understand in this class – the different body options have capacities of 5.0, 6.0 or 7.0 metres cubed, which cover the core of the body sizes offered by rivals. Even so, the Volkswagen Transporter and Vauxhall Vivaro offer more space.

Air suspension is a £410 option, but is well worth the extra. It can reduce the height of the rear end to 491mm, which is lower than any other van in this class, and makes loading much easier, whether you’re doing it manually or using a ramp. The system is self-levelling, so it returns to the normal height automatically before you drive off if you forget to reset it. Plus, the set-up is great if you’re often laden with fragile items, as it maintains a constant ride height. The price also includes tyre pressure monitoring.

It’s just a shame that a full-height steel bulkhead is also on the Dispatch options list, at £130. Competitors such as the Ford Transit Custom, Mercedes Vito and Vauxhall Vivaro offer this as standard, while Citroen buyers have to make do with a ladder-type bulkhead behind the driver’s seat if they don’t spend the extra. Still, there are some neat extras offered on the Dispatch, including a pipe carrier – a roof-level compartment that extends over the cab to accommodate pipes of up to 3.0 metres long on L2 models.

Buyers can also specify a top-hinged tailgate instead of the twin rear doors, although access to the load area is straightforward as it is, with all Dispatch vans getting two sliding side doors. These open to give a loading width of 924mm – enough for a Euro pallet – while the 1,245mm between the wheelarches is also sufficient for a Euro pallet. That means L1 models have plenty of space for two Euro pallets, while L2 models can just about fit three. Even the smallest Dispatch will carry almost a tonne (988kg), although the range’s 1,200kg maximum is eclipsed by every class rival.

Some Dispatch owners have reported problems with the power-steering. In certain cases, the electric power-steering pump has needed to be replaced. But the engines used in the Dispatch are well proven – they feature across the Peugeot, Citroen and Ford van ranges, and have been in production for some time, so any issues should have been ironed out. The Dispatch could have more safety equipment, though. ESC electronic stability control is only available as a £460 option, and buyers of the L1H1 1000 HDi 90 van can’t specify it at all. Side airbags aren’t available, either, while a passenger airbag is a £140 option. All rivals offer more comprehensive standard and optional safety equipment.

A comfortable driving position makes the Dispatch an easy van to drive. It helps that the driver’s seat adjusts for height, and that the steering column is adjustable, too. While the switchgear will be familiar to anyone who’s driven a previous-generation car from the Citroen and Peugeot ranges, the instruments are clear enough. A five-speed manual gearbox features on 1.6 HDi models, with 2.0-litre HDi versions of the Dispatch getting a six-speed box.

Citroen doesn’t offer an automatic option, although the manual gearboxes have a light shift action. Plus, the 125bhp 2.0 HDi has the performance to cope with long distances and high payloads. Ride and handling are good on all models, although it’s enhanced on those with the rear air suspension option.

The well thought-out Dispatch cab features various useful storage spaces in the dashboard, including a large glovebox and a deep passenger side bin. Adding to the storage options for odds and ends are door pockets each side and smaller cubbyholes in the dash. The interior has a light and airy feel, thanks to the large windscreen, while every Dispatch features a double passenger seat. But unless you specify the optional full-height steel bulkhead, road noise from the load area is an issue.

An overhead storage shelf is included as standard, as are remote central locking with deadlocks, electric windows and a trip computer. Setting the Dispatch apart in this class, though, is the Trafficmaster Smartnav navigation system fitted to all models. It includes a three-year subscription. Buyers wanting a better spec can go for a Dispatch Enterprise, which adds Bluetooth, a USB socket, rear parking sensors and air-conditioning for £880 extra. The full-height steel bulkhead is bundled in as part of the same package.