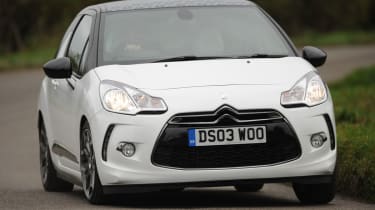 The original remains the best, and the appeal of the DS3 remains strong. It looks more distinctive and sporty than the 208, even after two years on sale, and the traditional interior is much more user friendly. The superb steering and gearbox give you more opportunities to exploit the eager engine and, as a result, the Citroen is a lot more fun to drive, making it easily worth the small extra outlay over the 208.

Citroen will be frustrated the latest additions to its DS range have failed to capture the imagination like the DS3 has. The first model to join the prestige sub-brand is still the best car the company builds, and in DSport trim it’s a stellar junior hot hatch.

The outlandish design still looks fresh and modern, and neat flourishes like the ‘shark’s fin’ kink in the B-pillar and floating roof make it appear sportier than the Peugeot 208. The gaping grille, with its integrated chevrons, gives the nose a purposeful look, but worryingly the dark chrome finish on the Ultra Prestige car in our pictures was peeling away from the bars.

The cabin is ageing with a little less grace, though. The fiddly stereo controls in particular are a bit of shock to the system after the Peugeot’s digital touchscreen. However, the more conventional layout is also a strength because the standard-sized steering wheel and well located dials make it easier to find a comfy driving position in the Citroen.

The limited edition pictured has a leather-covered dash, but even the standard gloss black trim is more striking than the grey plastics in the Peugeot. Build quality is similar in both.

Black rooflining and a lower seat position mean the DS3 feels more like a focused hot hatch, and its round leather gearknob is easier to grip than the 208’s oddly-shaped stick.

There are some quirks on the options list, though. The DS3’s sat-nav costs twice as much as the 208’s, at £800, leather is also pricier and heated seats aren’t even offered. The Citroen trails slightly on practicality, too. Its dark roof fabric and obscured side windows let less light into the rear, and tall passengers will be uncomfortable on anything but short trips.

At the test track, the DS3 shrugged off its 75kg weight disadvantage and was just one-tenth slower from 0-60mph, posting a time of 7.3 seconds. It was neck and neck during our in-gear tests, too, but on the road the car really showed its class.

The superb steering constantly feeds back information to the driver about the levels of grip, so it’s easy to exploit the power on tap. Combine this planted handling with a slick short-throw gearshift and tight body control, and it becomes truly thrilling to drive.

Despite its dynamic poise, the DS3 also felt more composed over bumpy roads than the stiff Peugeot, and was a quieter cruiser at any speed – as our sound meter confirmed.

The Citroen makes up for its higher price with more affordable insurance and servicing, plus stronger residuals. On a varied route, our test economy of 30.5mpg was well below the official figure, but that will improve if you resist the temptation to exploit the high-revving engine.