Built for comfort instead of driving fun, but the chassis and engines both offer reassuring performance

Focusing more on comfort and convenience than driving thrills, the Grand C4 SpaceTourer isn’t the sharpest car to drive, but it’s certainly fit for purpose. Soft suspension means the car does roll through corners – especially if it’s loaded with people and luggage – but the ride quality is great as a result.

The car floats over surface imperfections and absorbs big bumps with composure, which makes it comfortable in most conditions for all seven occupants. Poise is more important than cornering ability in a full car – although there’s still enough grip to give a reassuring feeling when travelling faster. 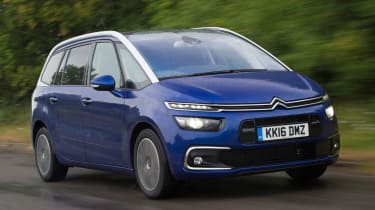 There’s a fraction more road noise than you get in the some of the quietest seven-seat MPVs also on the market, although the Picasso is is quiter than the latest Renault Grand Scenic, while the 2.0 BlueHDi is a little noisy at idle. The smaller diesels and petrols are very refined, however.

With little feedback through the flat-bottomed steering, a notchy manual gearshift and a fair amount of body roll, the SpaceTourer is far from sporty, but there’s plenty of grip and the kit list includes active cruise control, a reversing camera and blind spot warning which all contribute to a relaxing experience behind the wheel.

While petrol MPVs aren't popular right now, they could be in a few years time - and the big Citroen is ready. The only choice is the small but efficient turbocharged three-cylinder PureTech 130 which makes 129bhp and 230Nm of torque – enough to speed the Grand C4 SpaceTourer from 0-62mph in 10.8 seconds and on to a 125mph maximum. It’s available with a six-speed manual gearbox or a six-speed automatic.

The EAT6 auto box is vastly superior to the old torque converter that was offered before. The shifter is mounted on the steering column, which is a novel touch that also frees up storage space where the gearshift normally is. It has a tendency to hold onto lower gears for too long, meaning you'll occasionally shift up with the steering wheel paddles, but other than that's is pretty smooth and suits the relaxed nature of the car.

Diesel drivers have a little more choice. The entry-level oil-burner is the BlueHDi 100, a turbocharged 1.6-litre four-cylinder unit making 99bhp and 254Nm, which is good for 109mph and a 13.1 second sprint to 62mph. You can only have it with a five-speed manual box, and it's the only one with free road tax - but it's a little sluggish.

The BlueHDi 120 is a more powerful version of the same engine making 119bhp and 300Nm, with a top speed of 117mph. It comes with six-speed manual or auto gears, and the auto is actually a tenth quicker to 62mph at 11.5 seconds - and that powertrain is our pick of the range, as it gives enough performance for most MPV needs.

The third turbodiesel option is the BlueHDi 150 which is a 2.0-litre boasting 148bhp and 370Nm. With manual gears it tops out at 130mph with a 9.8 second 0-62mph time. The automatic version’s figures are 129mph and 10.2 seconds. It's pretty punchy, and if you regularly carry seven people or heavy loads then it may be worth the extra, but it's less refined than the 1.6.