With a super spacious interior and stylish ambience, the SpaceTourer only falls down on a few details

From a driver’s perspective, it’s easy to get comfortable in the SpaceTourer thanks to a wide range of adjustment – including height – on the driver’s seat, plus rake and reach on the steering wheel. Visibility is exceptional too, thanks to the extensive glass areas.

While the instruments and controls look nice, they are not always located with the sort of Germanic rigour that makes everything intuitive. It’s all easy enough to get used to, though the touchscreen isn’t particularly easy to operate when driving. 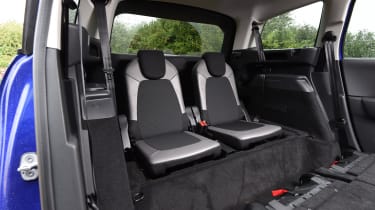 As you might expect from a dedicated family hauler, there are plenty of neat practical touches for odds and ends all around the car. Up front you get a deep bin behind the gearlever and a useful cubby in the middle of the dash. It’s not perfect, though – the door pockets are narrow, while Citroen hasn’t moved the fuse box in the switch from left to right-hand drive, so the glovebox is small.

The electric parking brake is fiddly and we found that the auto release only worked intermittently. Plus, some of the seat levers and latches feel a little flimsy and require more effort to operate than would be ideal.

Although it’s the same length as its predecessor, the Grand C4 SpaceTourer has a stretched wheelbase – so there’s 11cm more space in row two and it’s easier to spread legroom between the back rows.

While the Citroen has excellent middle-row legroom, tall passengers’ knees will rub against the tray tables.

Importantly for families, all three middle-row chairs are the same width and all have Isofix mounts. Space right at the back is tight but it trumps the smaller Kia Carens with better headroom, while roof-mounted vents, climate buttons, and cup-holders mean third-row passengers don’t feel ignored. To keep all the family gadgets charged up, there are 12V sockets in the front and middle rows, plus the boot.

With all seven seats in place, the Grand C4 SpaceTourer has a small-ish boot of 165 litres volume below the load cover.

However the rear seats fold into the floor easily to reveal a decent boot that’ll swallow 793 litres of luggage when the middle row is slid into its furthest forward setting. Folding the middle row is easy, too, and if you do you’re faced with a cavernous flat load deck with a 2,181 litre volume.

The clam-shell style tailgate opens wide with no load lip, and for really long loads the front passenger seat folds as well. While the range-topping model features a powered tailgate, it’s a £400 option elsewhere in the line-up.

Towing capacity varies from 1,300kgs to 1,700kgs depending on model.