Anything but dull, the C4 SpaceTourer offers the motorised equivalent of luxurious ‘loft living’

Many people carriers are dowdy and dull, but the Grand C4 SpaceTourer is anything but, as it blends space with stand-out styling. At the front, the low-line headlamps are incorporated into Citroen’s double chevron front grille, which runs the width of the car. This means the C4 has a minimalist yet smart appearance, helped by the wide-set second pair of light clusters and fog lights lower down the bumper.

Citroen’s designers have managed to keep the car’s side profile visually appealing – there’s masses of metal, but also enough glass to balance it out, so the overall shape doesn’t look awkward. The doors feature some gently sculpted surfaces, while the large, matt-grey roof rails that run from the base of the windscreen to the rear of the car add extra interest, along with the 18-inch turbine-style wheels on top-spec models.

The design is more reserved at the rear, with the tail-lights acting as the main styling element. This does mean it’s incredibly practical, as the lights are mounted on the boot lid, so it lifts to reveal a massive opening with a low loading lip. 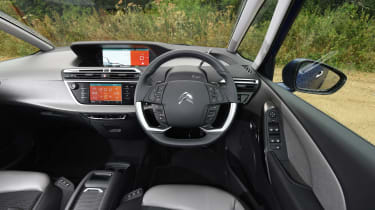 Inside, the SpaceTourer is just as fresh and funky and with soft-touch materials throughout, it feels every inch the plush people carrier, although a leather interior is a £2,000 option. The Grand C4 SpaceTourer's real plus point is space, as its crisp design is also incredibly functional and is very roomy.

The large glass area – including the big front quarter light windows and standard panoramic roof – means the cabin feels light and airy, even in the rearmost seats. The armchair-like front seats are very comfortable (if not that supportive) while the electric fold-out passenger footrest and seat massagers are a neat touch. Citroen’s brochure says the feel is akin to ‘loft living’, and we can see what they mean,

Climb into the driving seat, and your eyes are immediately drawn to the 12-inch TFT colour screen mounted high up in the middle of the dashboard – it’s fully customisable, so you can select one of three themes and also display pictures uploaded to your car.

Just below this, there’s a slightly smaller seven-inch touchscreen that operates everything from the radio and sat-nav to the climate control. It's not the most responsive or quick screen, but you do get used to it, while its futuristic layout and mix of colours add visual appeal. However, we found that if you have navigation in the top display, it disappears if you switch the lower display to operate a different function – very odd.

The tech-filled cabin sometimes over-complicates the driving experience, too. For example, a simple task such as adjusting the temperature forces you to take your eyes off the road as you navigate sub-menus in the central touchscreen. Citroen claims to have made it easier to use in the 2016 update, but in reality it's barely any different - but at least you now get Apple CarPlay smartphone connectivity.