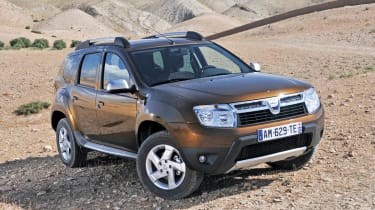 Never has so little cash bought you such a roomy, adventurous vehicle. Costing from a mere £10,800, the Duster rides well, handles confidently and makes up for its simplicity with a low kerbweight and frugal performance from its Renault-sourced engines. Choose the 4x4 version, and it will even make decent progress over rough terrain without too much complaint. What a shame, then, that we will have to wait until 2012 before seeing it on UK roads.

This is one off-road dust-up we can easily guess the outcome of: the Dacia Duster knocks opponents flat with a starting price of only £10,800.

For a five-seat family car roughly the size of a Nissan Qashqai, that’s simply astonishing. So, just who or what is Dacia? The Romanian firm recycles old-model technology from owner Renault to create a budget range welcomed not only by emerging countries, but also by newly cash-conscious European buyers.

With news that the cut-price crossover will spearhead Dacia’s UK launch in 2012, we headed to Morocco to try it out. The first surprise is how well the Duster rides. Away from the smooth boulevards of Marrakech, it was right at home on the flash flood-scored desert roads. The potholes were softened by the suspension, which also resists roll in bends.

Despite the high driving position and soft ride, the car corners like a hatch. This is partly because our front-driven version and the 4x4 model share 50 per cent of their suspension with current Dacias. Only the independent rear set-up of the 4x4 is new.

The whole hand-me-down approach extends to the engines: either a 105bhp 1.6-litre petrol, or a 1.5 dCi diesel with 85bhp or 110bhp. If these figures sound underpowered, then here’s the second surprise: the Duster is very light. The 2WD petrol car tips the scales at 1,160kg, while even the 4x4 diesel is a flyweight 1,294kg. By comparison, a base two-wheel-drive Skoda Yeti 1.2 is 1,345kg.

This means power is more than adequate, with the 1.6 petrol needing more work than either oil-burner but feeling lighter on its feet in corners. Economy is strong, too: our dCi 85 returns 55mpg and emits 135g/km of CO2. As engineers have worked hard to cut the diesels’ vibration, the petrol is actually noisier.

But this is all a long way from the original Duster – a Romanian-built farmers’ hack from the Eighties, given its name by its British importer. The car hasn’t lost its workaday feel: the new model’s cabin is functional, with a mish-mash of old Renault bits. Don’t expect clever storage bins or much luxury, but it’s all solidly built. One up from base spec (£11,890 for the diesel), our variant gets a height-adjustable driver’s seat and steering wheel, plus a 60/40 split rear chair that folds down to boost the 475-litre boot space to 1,760 litres. Back seat space is good as well.

The third big surprise is that the off-road ability impresses – if you pay the extra £1,700 for the 4x4. A lofty ride height and short overhangs give better rough ground clearance than even Land Rover’s Freelander.

A low first gear negates the need for a low-ratio set, and although the diesel needs to be worked hard to avoid stalling, it’s impressively versatile.The Dacia is already on sale across Europe, and should be a big hit among families and farmers alike. Provided, of course, an anticipated onslaught from Chinese manufacturers doesn’t fill its niche first!

Rival: Citroen Berlingo No family 4x4 can match the Dacia on value for money – an entry-level Nissan Qashqai costs the same as a flagship version of the Duster, at £15,950. However, if you’re looking for similar space and cut-price simplicity, the Berlingo Multispace people carrier is difficult to beat.