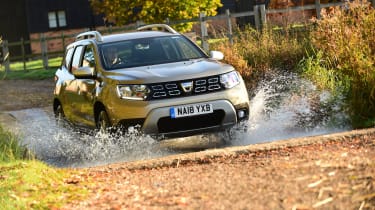 If you’re covering long distances or your commute to work involves motorways and dual carriageways, the Dacia Duster diesel is the best choice. A figure of 57.9mpg is mightily impressive for an SUV, and although it drops to 51.3mpg in the 4x4 version, it remains an economical proposition. However, emissions do suffer if you opt for the 4x4; 147g/km versus 128g/km for the 150PS 4x2 variant.

In the 1.3-litre TCe petrol versions, the figure drops to 43.3mpg for both the 130PS and 150PS 4x2 models, and 40.0mpg for the 150PS 4x4, which might seem like a huge difference on paper, but the story isn’t as clear cut as that. The diesel versions cost up to £2,000 more than the petrol equivalents, so opting for a more fuel-efficient Duster might be a false economy. And, there's the TCe100 to consider, which delivers 45.5mpg and emissions of 140g/km.

For an SUV, the Dacia Duster is surprisingly cheap to insure, but the groups vary according to the trim level, engine and whether you opt for two or four-wheel drive. The Bi-Fuel versions sit in group 11, while other variants are in groups 13 to 15.

In all cases, the Duster will be cheaper to insure than many of its rivals. For example, the MINI Countryman starts from group 17, while the Nissan Qashqai kicks off in group 14. 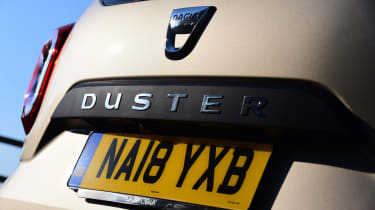 Thanks to the Duster’s incredibly low list price, depreciation will be thousands less than many comparable compact SUVs. After three years and 36,000 miles, you can expect the Duster to retain between 45 and 55% of its value, which is more than some of its pricier rivals.

Some trim levels fare better than others, however. For example, the Access trim, while cheap to buy new, is less attractive to used car buyers who tend to demand a little more than solid white paint, no air conditioning, steel wheels and no radio. Thanks to its improved tech, the Comfort trim will be in demand, while the added extras of the Prestige will ensure it appeals to a wider range of buyers.