Sporty DS 3 Performance Line looks the part, but it's pricey and the car is showing its age 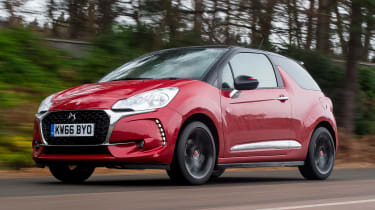 While DS’s Performance Line upgrades don’t really live up to the billing, the additional style inside and out will make it the DS 3 a more tempting proposition for some. There’s plenty of kit and the turbo petrol engine is a great unit, yet the interior is starting to feel dated and the DS 3 doesn’t manage to blend its entertaining handling with the refinement and composure of the best in the supermini class. Add in a price that makes a MINI look good value, and it’s becoming tougher to recommend.

DS might not have launched any brand-new models since its separation from Citroen in 2015, yet the trim level expansion has been going great guns. The DS 3 in particular is attempting to stay in the realms of desirability with range additions like the trendy ‘Givenchy Le Makeup’ and bold Performance Black editions. Now, there’s a new ‘Performance Line’ variant, and we’re driving it for the first time.

Performance Line aims to bridge the gap between the regular DS 3 and the 205bhp DS 3 Performance; think BMW M Sport and Ford ST-Line, and you’ll understand where DS is pitching its tarted-up hatch. It attempts to offer some of the racy design treatment from the Performance hot hatch, but at a more reasonable price point and with lower running costs. 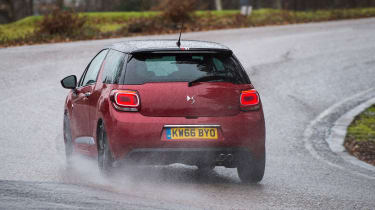 As such, you can opt for a familiar range of turbo petrol and diesel engines with the DS 3 Performance Line, kicking off with the 1.2-litre Puretech 110 manual. We’ve got the fastest choice in the range, which is the more powerful petrol with 128bhp.

Externally, there’s not a lot to mark out the Performance Line trim. DS makes lots of noise about its success in the Formula E World Championship – and how that inspires its road-going models – but there’s little evidence of that here. What you do get is a fresh colour palette with a choice of seven hues, plus contrasting black roof, alloy wheels and mirrors. Some new DS Performance logos, finished in red, white and gold, are found all over the body and in the centre of the alloy wheels. There are no physical bodywork changes to the DS 3, though, with Performance touches like the lowered suspension, bigger wheels and chunky side skirts notable by their absence. Still, the DS 3 remains an attractive supermini even without the extra garnish. 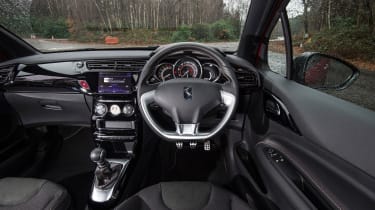 In fact, the most notable change that Performance Line brings is found inside, with the adoption of new leather and suede-effect ‘Dynamica’ cloth seats with red and white stitching. The contrast-stitched leather also makes its way onto the doors, gear gaiter and wheel, while new badging on the seat backs and special metallic trim also features. The cabin additions are subtle yet smart, though the rest of the interior is starting to show its age.

Those new seat covers don’t alter the driving position, which doesn’t cater at all well for those with longer legs. Nor does it affect rear headroom, which is tight for adults compared to most modern superminis. Practicality is fairly poor on the whole, with no cupholders and a near-useless glovebox. Cabin quality is generally good, with the glossy black dash trim a highlight, but it doesn’t take long to uncover scratchy, hard plastics on the centre console and doors.

The touchscreen is also frustratingly fiddly to use. PSA has proven with the new Peugeot 3008 that it now knows how to do user-friendly infotainment – and the DS 3’s setup feels distinctly out-of-date as a result. Still, Performance Line models come with a strong equipment tally. The trim sits in-between Elegance and Prestige, and comes with sat-nav, Apple CarPlay and Android Auto smartphone connectivity, cruise control, climate control and electric mirrors. So it should, though – this version costs nearly £19,000. 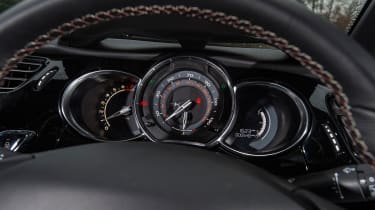 The DS 3’s driving experience is another area where rivals have caught up. The 1.2-litre turbo petrol engine remains a highlight; it’s flexible, torquey and efficient, and endows the supermini with a good turn of pace. It handles as well as ever, too, as there are no suspension changes to Performance Line models. However, it still isn’t as entertaining or refined as a MINI Cooper, as road noise is intrusive and the ride, while not uncomfortable, lacks composure on rougher road surfaces.

It’s a decent enough package, but with cheaper and newer superminis consistently upping their game dynamically, DS’s star supermini is falling behind the pack.