We get behind the wheel of the new Fiat 500X Sport, which adds a touch of flair to the ageing crossover’s range 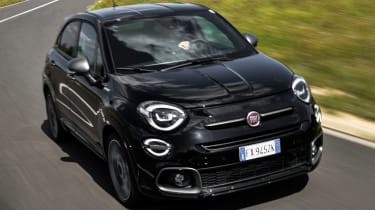 The Fiat 500X Sport is a welcome addition to the line-up. A largely style-focused upgrade, it hits its brief and offers the kind of cool BMW and Audi buyers have been lapping up for years. We suspect the cheaper 1.0-litre manual might be the pick of the range, however.

The ageing 500X has the highest conquest rate of any model in Fiat’s relatively restrictive model range. Around 70 per cent of buyers are new to the brand, making it an extremely important car for the company.

It’ll therefore come as little surprise that this new ‘Sport’ version ranks among the firm’s most crucial launches for 2019. Expected to account for as much as 40 per cent of the model mix, the 500X Sport is Fiat’s take on the Peugeot 2008 GT-Line and SEAT Arona FR.

The 500X Sport does little to break the mould, adding precious few mechanical changes and focusing largely on racier styling, bigger wheels and new interior trim. It’s arguably more recognisable than its closest rivals, separating itself from the rest of the 500X range via a significant-yet-tasteful bodykit and twin exhausts. 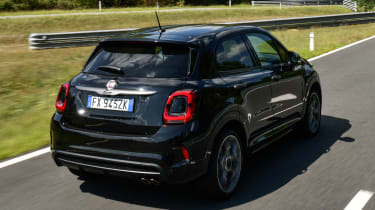 There are whiffs of Abarth about the new 500X Sport’s muscular styling, though bosses insist no such model is in the plan. Instead, Fiat will focus its attentions on the downsized FireFly petrol engines already present in the crossover range. There are two models to choose from; a three-cylinder 1.0-litre turbo mated to a manual gearbox, and a more powerful four-cylinder 1.3-litre unit – available exclusively with a six-speed DCT auto.

While the differences between the existing Urban and Cross models focus mainly on aesthetics, Fiat has made a few changes under the skin. The ride height has been lowered by 13mm, for example, with new front and rear springs and unique tuning for the shock absorbers. The engineers have also tweaked the steering – claiming to reduce both understeer and oversteer by as much as 26 per cent.

We weren’t able to drive it back to back with the standard car, but on the move the 500X Sport felt sharper and more eager to turn in. The steering has a pleasing weight to it; it isn’t all that communicative, but it tucks the car in nicely and points it where you want to go. Body control is adequate, if a little uninspiring, not helped by occasionally patchy on-the-limit grip from the specially selected Dunlop Sport Maxx tyres. 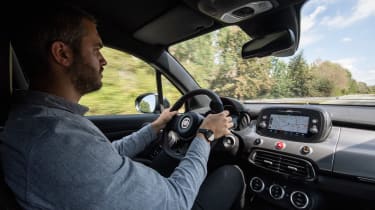 The 148bhp 1.3-litre FireFly engine is a known quantity, but that doesn’t stop it being a bit lazy and quite laggy alongside its TSI-engined VW Group rivals. The auto box is reluctant to change down in normal driving, and while you can take control via the miniscule steering-mounted paddles, few buyers are ever likely to do so. But as Fiat continues to make clear, the 500X Sport isn’t supposed to be any kind of semi-skimmed Abarth; we suspect the lower-power manual model might be a better fit.

We didn’t get to experience the car over any truly rough or ridged roads, but our test model displayed little reason to question the ride quality – even on the optional 19-inch wheels. It’s perhaps not quite as quiet as the most refined cars in this class, however.

Anyone who has spent time in the existing 500X will feel right at home sitting in the driver’s seat of this latest Sport model. Aside from some specific stitching and grey logos, the seats are the same, which means you still sit a bit high and with less support than some drivers might like. The steering wheel gets a flat bottom and some Alcantara trim, but give or take some unique graphics, a darker headlining and specific air vents, that’s your lot.

The seven-inch infotainment screen has been vastly improved and upgraded since the 500X first launched, but it still lags behind the competition when it comes to size and functionality. The menu layout isn’t all that intuitive, and the graphics are showing their age; the new Skoda Kamiq shames the Fiat in this area. 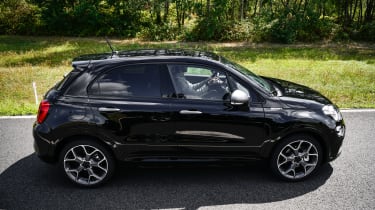 UK specs are yet to be finalised, but it’s likely that every Sport model will get LED lights, cruise control, parking sensors and18-inch wheels, as well as that seven-inch screen with Apple CarPlay and Android Auto. Personalisation will remain key to the 500 family’s appeal, with options likely to include ambient lighting, keyless entry and extra sport-themed trim. The Alcantara steering wheel is expected to be standard on all UK cars.

Of course, space in the back seats and boot is unchanged, though that dark headlining does make it feel a bit more claustrophobic. It’s not the most practical car in its class, but growing families stepping up from a B-segment supermini shouldn’t be too disappointed.

Price will play a big part in this car’s success, and at around £1,000 more than the equivalent 500X Cross we can see plenty of buyers making the jump. That’s likely to equate to just a few pounds per month on a monthly PCP finance deal. For comparison, a SEAT Arona 1.0 TSI 115 FR Sport with a similarly generous kit list, costs around £350 less than the entry-level 500X Sport 1.0 120hp. There’s no comparable Arona 1.5 TSI DSG; that model is manual only.