We were impressed with the new Skoda Kamiq when we first drove it in France, but is it just as good on UK roads? 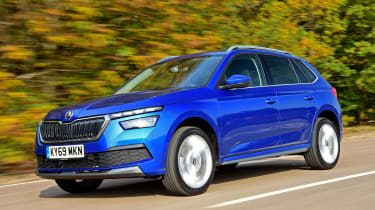 The Skoda Kamiq is as impressive here as it was when we drove it in France a couple of months ago. It drives neatly and offers loads of space, as well as a solid, well-built interior. The reason this version loses half a star ultimately comes down to value; the mid-spec SE offers a better balance of kit versus cost.

It was the height of summer when we were first thrown the keys to Skoda’s new, entry-level Kamiq SUV. We loved its blend of practicality, performance and low running costs; the Kamiq was “predictably brilliant”.

The car is now on sale in the UK, with first customer deliveries expected in the coming weeks. Prices start from just £17,100, and every version gets alloy wheels, LED lights and a touchscreen infotainment system.

But while Skoda expects that low list price will entice new customers into its showrooms, it’s the better equipped SE and SE L cars that will make up the bulk of Kamiq sales. Here, we’re driving a top-spec model with the middling 113bhp 1.0-litre TSI petrol engine to see if it should be labelled as the Auto Express Kamiq of choice. 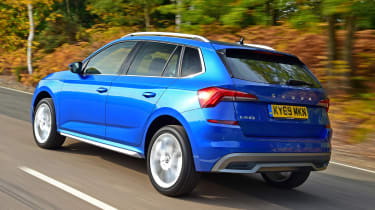 The first thing you notice is how well built the Kamiq appears on the inside. We’ve come to expect great things from the VW Group’s ‘budget’ brand, but it feels anything but budget from behind the wheel. The standard-fit part-suede fabric seats look and feel plush, and everything you regularly touch is covered in leather or squishy plastics.

Furthermore, on flagship SE L cars, most of what you see in front of you comes as standard. The gloriously effective and super-sharp 9.2-inch touchscreen sat-nav system is included, for example, as are the Virtual Cockpit dials. You won’t pay extra for wireless Apple CarPlay, nor the eight-speaker stereo, dual-zone climate control or keyless entry system. Our car’s silver interior trim is a trivial £50 extra.

That’s not to say our test car was devoid of optional extras. But most of the kit (the heated seats and windscreen, electric tailgate, automatic high beam, etc) that had been added could be filed under ‘nice to have’ rather than ‘essential’ for your average family buyer.

Space, as we commented on previously, is very generous. The Kamiq is a car that takes aim at segment stalwarts like the Renault Captur and Nissan Juke and while it can’t match the former’s cavernous 536-litre boot with the back seats in place, it beats both when it comes to outright load volume. Room in the back of the Skoda is pretty much unrivalled in this class.

The driving experience is another area in which the Kamiq sits near to the front of the pack. It’s not an exhilarating car to drive, but that’s unlikely to matter to the customers this Kamiq is so clearly aimed at. Buyers of SUVs like this are more concerned with style and safety than on-the-edge thrills; the small Skoda gets the balance just right. 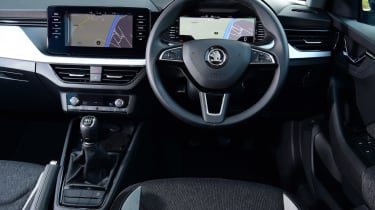 Body control is good for a car of this type and turn-in is sharp, allowing you to point the car confidently. The controls are light; the steering, clutch and gear lever are easy to operate, if a little lacking in feel.

The engine, while all but identical to the unit found in the new Audi A1 Citycarver, feels a little more restrained in the Kamiq. That’s likely due to the manual box; where the Audi’s auto kicks down quite readily, you have to work the Skoda’s transmission harder to make decent progress. This is particularly noticeable at motorway speeds, where you’ll need to change down for overtakes or particularly steep inclines.

This 1.0-litre TSI will be more than sufficient for those who spend most of their time in town, however. It’s quiet, refined and plenty punchy enough for nipping about in heavy traffic. The big 18-inch wheels generate more tyre noise than the smaller rims found on lower-spec cars. We’d save some money and opt for the far cheaper (£19,935) Kamiq SE.