Can a raft of upgrades push the appeal of the Fiat 500 city car beyond those iconically cute looks? 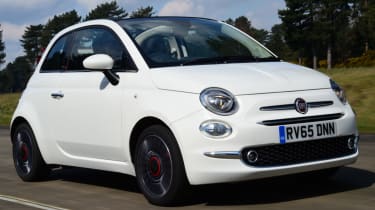 Fiat believes the latest updates to its best-selling 500 city car are significant enough to warrant calling it the ‘New 500’, but that’s stretching things a bit too far. While the upgrades are pleasing – the new infotainment system is badly needed and the facelift freshens up the looks but doesn’t ruin the original charming recipe – the car’s intrinsic faults like flimsy build quality, poor equipment levels and high list prices are still present, which is a shame. Still – especially in 500C convertible guise – there aren’t many cars on sale today that can rival the little Fiat’s impossibly chic character.

Fiat took a big gamble in 2007 in launching the new Fiat 500. Taking on the MINI with an affectionate reinterpretation of its own icon was no easy thing. But with 1.5 million sales clocked up globally and the new ‘cinquecento’ having spawned the 500L MPV, 500L Trekking, 500L MPW seven-seat MPV and the 500X crossover over recent years, it was a gamble that has clearly paid off.

Time has caught up with Fiat’s bambino though, and the company has responded by updating the 500 to keep it fresh. Fiat believes this revision is substantial enough for the car to be branded ‘New 500’, but that is stretching things a bit. While Fiat may well have changed 1,800 parts, the New 500 is still mostly the same as the old one albeit. The key differences you’ll notice are the new colours, tech and tweaked engines.

It’s easy to see why Fiat is playing it safe with this refresh. By now, seven years on from the car’s original launch, it was expected that Fiat would have given us an all-new 500. But with sales growing every year since its debut, the current 500 is a cash-cow and one that’s not ready for killing off just yet. 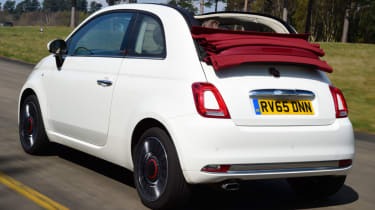 Consequently the exterior changes are barely noticeable – even on the top spec 500 Lounge model that wears the most visual tweaks. At the front there’s a 500X-like chrome flash across the car’s nose, a pair of new larger elliptical day-running lights and Lounge versions get a glitzy chrome-studded lower grille.

At the back the old car’s simple light clusters have been replaced with ring-shaped ones with body-coloured centres, and there’s a new chrome bar in the bumper that now houses the reversing and fog lights. Two new colours join the paint palette and there are a couple of new alloy wheel designs, and that’s it.

Strangely though, only the entry-level Pop, mid-spec Pop Star and top-drawer Lounge 500 and 500C soft-top models get the facelift – the sportily-styled 500S will continue with the ‘old’ 500’s look and will get the visual makeover in mid-2016, around the same time as Abarth launches its facelifted 500 models. 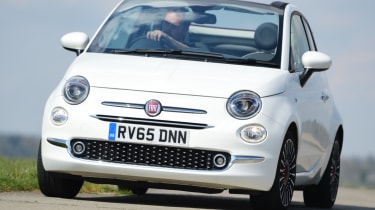 For now the 500S and Abarth 500 cars won’t get the interior updates either which is a shame as it’s on the inside where the ‘new’ 500 has made the biggest step forward over the outgoing car.

The charmingly retro dash has been brought bang up to date with a five-inch Uconnect infotainment screen that’s similar in feel to the 500X’s. Along with the screen, there’s a newly designed steering wheel complete with buttons for the audio, a lid for the glovebox and Aux-in and USB inputs are standard on the entry-level £10,980 Pop model. The Pop Star (from £11,765) adds air con, heated mirrors, 15-inch alloys and a 50:50-split folding back seat while top spec Lounge (from £12,640) includes a panoramic glass roof, touchscreen Uconnect with Bluetooth, rear parking sensors, a leather steering wheel, extra exterior chrome and fog lamps.

The facelifted 500 also brings a new selection of customisation options allowing a greater degree of personalisation than ever before. If the varied paint palette doesn’t impress, the 500 can now be ordered with a ‘second skin’ – there’s a choice of six factory-fitted patterns that wrap the upper part of the car – there are more interior colour schemes and new options such as a seven-inch full-TFT instrument cluster for £250. If that’s not enough there’s also Fiat’s Mopar programme that offers more than 100 further options. 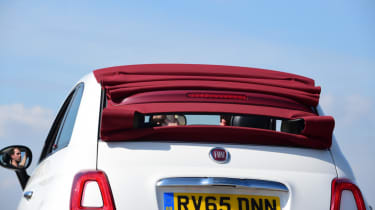 All the engines in the 500 range have been tweaked to meet Euro-6 emissions levels as well. The perennial 68bhp 1.2-litre four-cylinder petrol remains as do the 84bhp and 104bhp 0.9-litre two-cylinder TwinAir turbo petrols with the 1.3-litre diesel arriving later this year.

We got behind the wheel of the lower powered 0.9-litre TwinAir 500C – the convertible model that comes with a £2,650 premium over the regular 500 hatchback. The electric fabric roll-top roof is the epitome of retro chic and is a good compromise between the Vauxhall Adam’s large rollback sunroof and the fully open-top MINI Convertible, even if the Fiat’s system ruins rear visibility when the roof is down.

Until the arrival of a special ‘eco’ version of the 1.2, this is the greenest engine you can buy in the 500 with CO2 emissions of 90g/km and claimed fuel consumption of 74.3mpg. It’s worth noting, however, that previous Auto Express tests of this engine have never yielded MPG figures anywhere near 70mpg. Top speed is 107mph while 0-62mph takes 11 seconds. 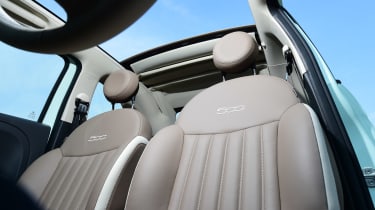 Disappointingly the ‘new’ 500 feels the same to drive as the outgoing car. That’s not a massive criticism as the lively two-cylinder petrol is fun to use. Apart from the all-electric Renault Twizy, the TwinAir is probably the best engine around for city work – its fizzy nature allows you to carve through traffic with ease, as does the light, accurate steering. The soft suspension makes light work of urban potholes too.

But hit the open road and the engine’s trait of sudden torque delivery – resulting in the revs bouncing off the limiter – quickly becomes tiresome, and that previously likeable soft suspension gives an unsettled ride at speed. The five-speed gearbox also lacks the crispness of the MINI’s or even the Adam’s.

However, the 500’s intrinsic faults haven’t been ironed out on the ‘new’ version – and that’s the real problem here. That achingly Fifties dashboard is blighted by some horribly flimsy and scratchy plastics around the centre console, and even worse, the same material covers the majority of the doors. 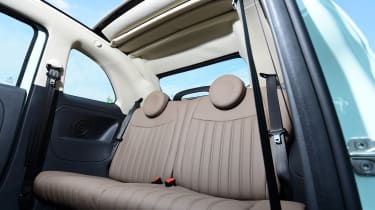 The steering wheel still doesn’t adjust for reach and the front seats (while beautifully styled) are not only unsupportive but are also too high-set. Space in the back is still tight for adults and the boot space remains a meagre 185 litres with the seats up and 550 with them down (it’s even less in the 500C at 182 litres).

Overall then, while there are some welcome updates the ‘new’ 500 isn’t the upgrade we were hoping for.