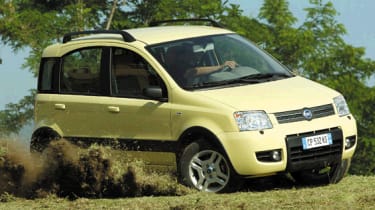 The Panda 4x4 is an impressive package, and will be even more so if Fiat keeps its pricing in line with the rest of the superb range. But we'd advise you wait for the Multijet diesel, as the 1.2-litre petrol feels frustratingly underpowered. Otherwise, the Panda's funky looks and surprising abilities should make it a surefire hit.

This new version uses a permanent four-wheel-drive set-up, and is the spiritual successor to the Steyr-Puch Panda 4x4 that proved briefly popular in Britain in the late Eighties. And the 2004 variant is very, very funky.

It shares the standard model's cute, boxy styling, but is raised by five centimetres to give it extra ground clearance for light off-roading. Its mud-plugging aspirations are enhanced by the addition of chunky bumpers and rubbing strips, inset foglamps and guards for the sump and exhaust, all to protect the car from damage in the rough.

Two versions are available on the Continent - the entry-level 4x4, which has black plastic bumpers and no wheel trims, plus the more upmarket Panda Climbing. However, it's unlikely that the UK offerings will be identical, as specs and prices have yet to be finalised.

We drove the better-equipped car - although luxury isn't a word you'd associate with even the range-topper. Air-conditioning and a CD player are likely to remain on the options list. On the plus side, all will come with Fiat's CONNECT sat-nav and telematics system, as the Italian maker sees this as important to the Panda 4x4's target market of outdoor types. Otherwise, the cabin is standard Panda, with the addition of wipe-clean rubber overmats to protect the carpets from any off-road muck. Only one engine will be on offer at launch, and unfortunately it's not exactly the best unit that Fiat has in its stable. Coupled to the all-wheel-drive transmission, the 60bhp 1.2-litre petrol motor feels underpowered, taking 20 seconds to reach 62mph from rest and struggling to top 90mph. It's fine for trundling round town, but lacks the muscle to thrive in off-road situations. However, the 1.3-litre Multijet diesel - which is scheduled to appear in the spring - promises better things, with greater torque and livelier acceleration making it a more attractive proposition.

And that's good news because, from our experience with the 1.2-litre model, the 4x4 shows lots of promise. Under normal driving conditions, it's as you would expect from a Panda - great in the city and a capable enough all-rounder on more open roads.

Admittedly, the lethargic performance is frustrating, but the car is stable when cruising. Plus you also get ESP, meaning the Fiat demonstrates assured handling capabilities for such a small vehicle. But it's off-road where it is really surprising, for although it might look like a jacked-up city car, it's actually remarkably capable. The 165mm ground clearance is as good as that on many larger 'soft-roaders', while the short wheelbase and lack of front overhangs give it an extraordinary ability to cross over ramps and ruts.

Fiat says the 4x4 can ascend hills with a gradient of more than 50 degrees. Meanwhile, both the approach and departure angles (the maximum gradient at which the car can go up and leave off-road obstacles) are nearly as impressive as those of a Land Rover Defender.

And that's quite a remarkable achievement. If you're a country dweller who needs off-road ability, or merely a city type who wants a car which looks seriously cool, then the Panda 4x4 will leave you jumping for joy...