While the Fiesta and Fusion have been treated to two new gearboxes, Ford has also set its engineers to work on a new Continuously Variable Transmission for its larger Focus C-MAX MPV. 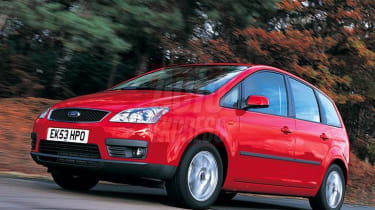 Ford is to be congratulated on creating one of the smoothest CVTs around. It's not without fault, but this is easily the most relaxing C-MAX in the range. Once they get used to the gearbox, many compact MPV buyers will love it.

While the Fiesta and Fusion have been treated to two new gearboxes, Ford has also set its engineers to work on a new Continuously Variable Transmission for its larger Focus C-MAX MPV. With UK buyers still reluctant to give up conventional autos, will the blue oval be able to tempt them with this latest addition to its capable compact MPV range?

Available only on 1.6-litre diesel variants, the new gearbox is a world away from the crude and noisy CVTs of old. Ford's engineers have revised the belt-driven transmission and improved the electronics. This enables the driver to choose a fully automatic mode or push the selector sideways and play with seven pre-selected fixed ratios.

Left as an automatic, the CVT system gives the C-MAX smooth acceleration, whatever the speed. And should you require a bit more grunt to overtake on the motorway, the kickdown mode has the same effect as dropping down a gear, holding the engine at 4,000rpm, where the peak power is delivered. But that's not to say this new transmission is perfect. Many drivers won't like the lack of feel that the Ford system provides, and fuel economy is expected to be poorer than that of models with the manual gearbox. What's more, despite the best efforts of the engineers, there is still an occasional whining noise from under the bonnet - and this soon becomes irritating on long journeys.