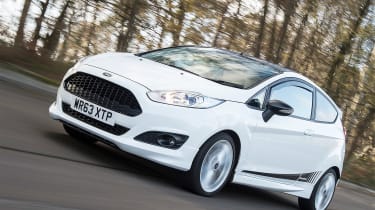 Mountune’s MR165 kit  makes the Fiesta EcoBoost  more eager, but at £1,399 it pushes the price of the existing 123bhp Titanium-spec car dangerously close to that of a basic Fiesta ST. Still, if you already own a 1.0-litre Fiesta and want more power, then Mountune is  the way to go. The MR165 kit makes a good car even better. Just be aware that this Racing kit could invalidate your manufacturer warranty.

The latest tweaks, available in the MR165 kit, benefit owners of the Fiesta EcoBoost, and can be fitted to 123bhp or 138bhp cars for £1,399. Changes include a high-flow induction kit, larger-capacity intercooler  and a selection of higher-quality pipes and hoses. The result is 163bhp and 245Nm from the tiny 1.0-litre three-cylinder.

It certainly feels quicker than both the standard-output cars on the road. Put your foot down in third gear and the turbo picks up pace at a surprising lick. You still get that characteristic three-pot thrum, but it feels far less pressured than the standard EcoBoost. 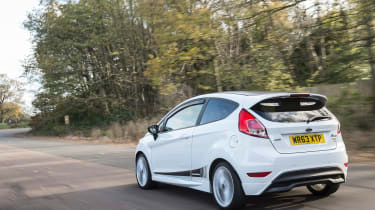 It’s still a light car, too, and from a standstill feels suitably sprightly. In a straight-line drag it’ll out-sprint a VW Polo Blue GT, and comes close to the more powerful GTI. The Fiesta takes 7.2 seconds to do 0-60mph  – that’s 1.3 faster than the 138bhp model and a full 2.2 faster than the 123bhp car.

But it’s not all brawn and no brain – Mountune has history and knows what it’s doing. The Fiesta was always a good base for a sporty hatch, but the firm’s engineers have made this car even more playful.  It’s great fun to drive, and sets a  new benchmark in its class.

Not only is it much quicker than the standard car, but you can throw it around corners with confidence. Grip is good, yet lift off the accelerator mid-corner and you can flick the back end out before the traction control catches you and puts you back on the straight and narrow. However, the 2013 Zetec S-based car we tried had no means of switching this off, resulting in frustrating power cuts on the exit of greasy corners. 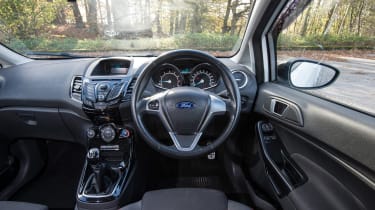 In terms of styling, the package’s only changes are subtle bootlid badges. Our car came with extra boy-racer graphics down the side, but these are options. Inside, it’s standard Fiesta – both front and back.

Mountune couldn’t confirm whether the mechanical changes made any difference to economy or emissions, but tweaked cars are likely to cost slightly more to run. There’ll inevitably be a slight drop on the 138bhp car’s 62.8mpg – but if you drive this Fiesta as it’s intended, it’ll fall short of that anyway.

As it’s based on the standard model, both new and existing cars can be upgraded. The set-up can be installed either at Mountune’s HQ in Essex, or at one of the UK’s 13 other approved Mountune PRO Ford dealers. Fitting takes two hours, all the additional parts are  covered for 12 months or 12,000 miles.