The Ford Mondeo is great to drive, but with a new model on the way it seems dated 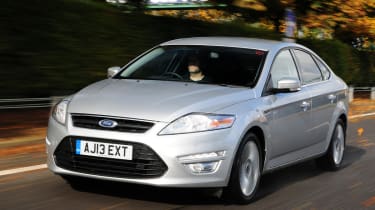 The Ford Mondeo hasn't changed much since it first arrived in 2007, but since it's still great to drive and comes with loads of standard equipment that's not necessarily a bad thing.

The Mondeo is available as a hatchback or estate, and the specifications on offer include the entry-level Edge, the mid-range Zetec Business Edition, the Titanium X Business and the top-spec Titanium X Sport. Every Ford Mondeo gets air-conditioning, parking sensors and stop-start, a generous equipment list is a strong selling point for the car.

The engine range in the current Ford Mondeo is solid, with a set of smooth petrols (including the impressive EcoBoost turbo units) and economical diesel motors. The most frugal engine in the range is the 114bhp 1.6-litre TDCi diesel, which returns a healthy 67.3mpg. If you're after the most powerful car in the Mondeo range, you'll want the 2.0-litre turbocharged EcoBoost with 238bhp - there's no Ford Mondeo ST or ST220 model currently.

Today's Ford Mondeo isn't a bad buy, but there is a new version of the Ford Mondeo on the way very soon - so you may want to wait for the improved version to arrive in showrooms before you make your decision. Of course, dealers will be willing to sell the current car at a bit of a discount thanks to the new model's imminent arrival - so a big saving on the current car might be a better option for some.

The Ford Mondeo's main rival is the Vauxhall Insignia, which boasts a better interior than the dated Mondeo. Other rivals include the Skoda Superb and Volkswagen Passat from the VW Group, which offer excellent practicality- but they can't match the Mondeo for driver engagement.

With its responsive steering, excellent body control and a supple but comfortable ride, the Ford Mondeo is a great choice for a fun-to-drive family car - but it is pretty big: almost as big as a BMW 5 Series.

The Mondeo has always led the family car field for entertaining front-wheel-drive handling, and even after all this time on sale, that’s still the case. It feels livelier than an Insignia through corners as a result of sharper turn-in and nicely weighted steering. Grip under cornering is also excellent. 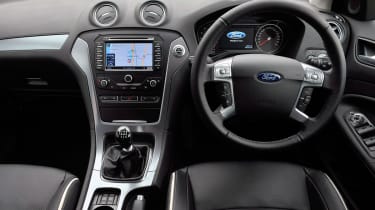 There’s not as much body roll as in an Insignia and the Ford feels surprisingly small and nimble on a twisty road due to its alert responses. Granted, sporty models have slightly stiffer suspension for that livelier feel, but they're still decent to drive and the rest of the Mondeo range generally offers a bump-absorbing ride.

While the Insignia does a better job of ironing out bumps, the Mondeo is still reasonably comfortable – but there’s more road and engine noise in the Ford - especially at motorway speeds.The Mondeo's six-speed transmission has a solid and positive shift that allows you to make the most of the engines' performance.

Until the new Ford Mondeo arrives in late 2014, there are no hybrid or plug-in hybrid models in the current Mondeo line-up.

The most efficient engine in the Ford Mondeo range is the 1.6-litre 114bhp TDCi, which returns 67.3mpg and emits 109g/km of CO2. This is available on the entry level Edge, mid-range Zetec Business and higher end Titanium X Business cars.

There is also another 1.6-litre engine available, but it's a turbocharged petrol EcoBoost unit that generates 158bhp. It returns 44.1mpg with CO2 emissions of 149g/km and can be specified on Zetec Business and Titanium X Business models.

The Ford Mondeo is also available with a 2.0-litre diesel engine, which can be specified with either 138 or 161bhp. The 138bhp unit is available on Zetec Business and Titanium X Business models and it achieves 62.8mpg plus 119g/km of CO2 with the six-speed manual gearbox. When mated to Ford's six-speed Powershift Automatic gearbox, its emissions increase to 136g/km of CO2 and it achieves 54.3mpg.

The 161bhp 2.0-litre diesel is available as either a six-speed manual or six-speed automatic. All models with either transmission achieve the same mpg and CO2 emissions as their 138bhp counterpart.

The other diesel engine in the range is a 2.2-litre unit, which is available on the flagship model in the Ford Mondeo range - the Titanium X Sport. It emits 159g/km of CO2 and returns 47.1mpg. When fitted with the automatic gearbox, its emissions rise to 173g/km and its fuel economy drops marginally to 55.1mpg.

The most powerful engine in the Ford Mondeo range is the 2.0-litre 238bhp EcoBoost which is available on the Titanium X Sport model. Despite having a top speed of 152mph, it achieves 36.7mpg plus CO2 emissions of 179g/km.

The Ford Mondeo has been a stalwart of the Ford range for years, so they're not an uncommon sight on UK roads. Mainly motorways.

The Ford Mondeo's dimensions make it taller and wider than the Vauxhall Insignia. However, it's a bit shorter and its angular lines (taken from Ford's 'Kinetic' design philosophy) contrast with the Insignia's curves.

While Ford has facelifted the Fiesta, Focus, S-MAX and C-MAX with a new gaping grille, the Mondeo carries on with a small upper grille and large opening in the bumper. Following the 2013 overhaul, LED running lights were also added. From the rear, the Mondeo doesn't look bad either, and its chunky lines are complemented by angular tail-lights a bit like those on the Volvo S60.

While Ford has regularly updated the Mondeo's exterior, the brand has done very little to keep the interior fresh. There's nothing wrong with it as such, it's just quite dated - the new 2014 model is set to rectify this.

A large, flat facia is dominated by plenty of hard plastics, and like the smaller Ford Focus, there's plenty of fiddly buttons - most notably on the dash and the climate control.

The Mondeo's standard sat-nav has a low-resolution screen – although the navigation itself is easy to use – and the red dot-matrix trip computer display that’s set between the dials looks very dated when compared with the smart, widescreen TFT screen fitted to the Vauxhall Insignia.

Although it's not the most spacious car in its class, the Mondeo is a still a very practical car, especially in estate form.

The Ford has a larger boot floor area but a narrower boot opening, despite the sill being lower.The Mondeo is also very spacious in the cabin area - or it at least feels it - thanks to a deep cubby under the front armrest, and large door bins.

Its big windows also make the Ford's interior feel airier than its rivals. The driver's seat is also fully adjustable, and the chunky steering wheel moves for both reach and rake.

The Ford Mondeo ranked an eventual 84th out of 150 cars in our 2014 Driver Power Customer Satisfaction survey, dropping 28 places.

Owners stated that running costs are high, and it also scored low for build quality. What's more, the Mondeo was described as being uncomfortable and lacking in technology.

At launch in 2007, the car was crash tested by Euro NCAP, and achieved a five-star rating. While the current NCAP test is a lot tougher, it’s worth noting that the Mondeo has seven airbags.